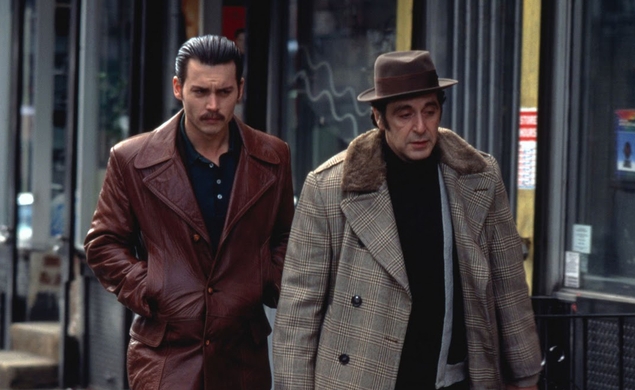 Conventional wisdom in 2015 dictates that the careers of Al Pacino and Johnny Depp have headed down the wrong path—Pacino as the gesticulating ham, overacting to the point of self-parody (though I’m not on board with this opinion), and Depp as a cartoon weirdo delivering mannered performances behind pancake make-up. (I’m fully on board with this opinion.) But both men gave great, subtle, down-to-earth performances in Donnie Brasco, a fact-based thriller about the dangerous, complex relationship between an undercover FBI agent and the aging gangster who serves as his point-of-entry into a mob family. Depp plays the agent, Joseph Pistone, who enters into the operation under the name “Donnie Brasco,” and ingratiates himself to “Lefty” Ruggiero (Pacino), who in turn introduces him to other men working for the Bonanno crime family. Written by Paul Attanasio, a former journalist and creator of Homicide: Life On The Street, Donnie Brasco is an absorbing, straightforward telling of an wrenching story, one that reveals that tragic consequences of a deep-cover investigator who not only feels for his mark, but becomes so immersed in criminal culture that he can’t find his way out the other side. Depp registers Pistone’s ulcerous inner torment beautifully, but it’s Pacino who owns the movie as a hitman condemned by his betrayal. Donnie Brasco shows twice on Saturday night, at 7:35 p.m. and 11:30 p.m Eastern.