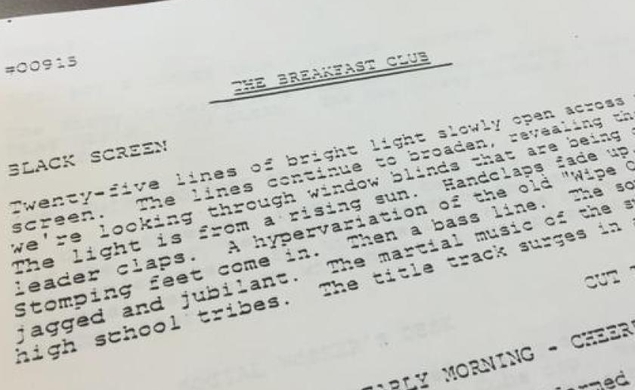 It does not seem like too much of an exaggeration to call The Breakfast Club a generational milestone. It is more than just a movie; it is like a sacred text whose message—despite our differences, we are all some combination of well-worn high-school archetype—has resonated through time and outlasted even its creator John Hughes, who was furiously prolific for a long time then seemed to abruptly stop.

The original screenplay was dated September 21, 1983, two years before the film became one of the defining teen movies of all time and certainly one of the best-loved high-school comedies of the 1980s. Much of The Breakfast Club was filmed inside the shuttered Maine North High School, in a bit of lore every Chicago high-school kid is all too aware of. Other mementos relating to the filming of The Breakfast Club were found as well, including a contract with Universal to rent the school out for $48,000.

Ken Wallace, the superintendent of District 207, has big plans for what he refers to as “an iconic piece of history”: He hopes to have it preserved and displayed for public viewing so generations of fans can gaze at the script in awe and ponder how Judd Nelson’s career took off with that magical assortment of pages. It’s appropriate that the original screenplay was found now, as the film is enjoying its 30th anniversary, with all the attendant hoopla.

Wallace chucklingly noted that there was pizza grease on the upper left corner of the script, though it remains to be seen whether this particular detail of the screenplay will be preserved for posterity as well.