In Park Avenue: Money, Power And The American Dream, the Koch brothers are evil incarnate 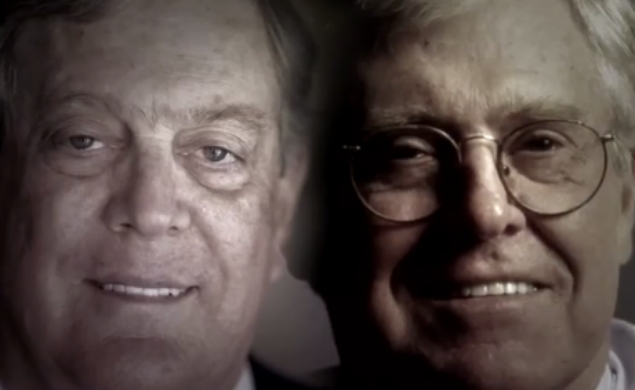 Alex Gibney’s 2012 documentary Park Avenue: Money, Power And The American Dream is an awfully blunt title for an even blunter movie. But a more accurate, or at least forceful, title for it would be We’re All Screwed or, for those with more sensitive sensibilities, We’re All Fucked.

That is a bit of an exaggeration, however, as we’re not all fucked. Oil magnates the Koch brothers, those heroes of the Tea Party and scourge of the American left, are doing just super. In fact, they and 398 other American masters of the world reportedly own as much wealth as the lower 50 percent of the population in the United States. As Gibney, who delivers constant narration throughout the documentary, says, the gulf between the rich and the poor is beginning to resemble the Grand Canyon.

Gibney uses the two very different Park Avenues as a metaphor for the shameful iniquities of capitalism. On the Manhattan side of Park Avenue, the very rich live lives of Caligula-like decadence. One wealthy eccentric had an exact model of his apartment made in a hotel he owned. Another purchased 25 fully stocked Christmas trees for his home. We learn these facts from a doorman whose face has been obscured. One of the frustrations of the documentary is that we do not learn more about the grotesque excesses and insanity of the people at the upper 1 percent of the income bracket.

On the other side of Park Avenue, in the South Bronx, people struggle just to survive from day to day. No matter how hard they work, they’re enmeshed in a system designed by and for the folks on the other side of Park Avenue. Park Avenue depicts capitalism as a hopelessly rigged game that offers the shimmering promise of upward mobility and a chance at great wealth, then delivers food-service jobs that are taxed at a higher rate than the salaries of billionaires.

Park Avenue is not a subtle documentary. Nor is it fair. Gibney stops just short of Photoshopping bloody fangs and devil horns on the Koch brothers to convey their ghoulish evil and contempt for common people. He repeatedly uses the tacky, cut-rate stylistic devices employed in negative campaign ads. In Gibney’s world, the rich are always smiling creepily while flaunting their wealth against a backdrop of sinister music.

Less a documentary than an angry jeremiad, Park Avenue expands its scope beyond New York to examine the poisonous role money often plays in politics. Gibney pays special attention to Wisconsin, where one-time Ayn Rand super fan Paul Ryan (who denies ever being that into her theories with the same disingenuous tone a friend might insist that despite dressing as Bee Girl every Halloween she isn’t really that into Blind Melon) was a rising star in the Republican Party when the film was made. He’s also damning of Scott Walker, whom he posits as the bastard child of money and ideology. Ryan and Walker are also, not surprisingly, major beneficiaries of the Koch brothers’ largesse.

Gibney even goes so far as to suggest that being rich makes you callous and mean. He points to studies conducted around Monopoly games where people, given a large amount of fake money, begin to act superior and hostile toward those with less fake money. Over the course of 70 didactic minutes, Gibney makes a damning case against contemporary capitalism and the ruling class that would be more successful and more convincing if it were more nuanced and complex, less black and white and more filled with shades of gray.

Our nation is obviously fractured violently between the haves and the have-nots, but Gibney’s equation of wealth with amorality and evil and poverty with noble striving can’t help but feel more than a little reductive and one-sided. I like Gibney a lot as a filmmaker, largely because he chooses such interesting subjects, but I always leave his films (most recently his Scientology documentary Going Clear) wishing that a better documentarian had made them, one less glib and prone to superficiality. That’s the thing about Gibney: He always gives you just enough, and not one bit more.

Still, for all its one-sidedness, Park Avenue boasts a certain blunt power. My editor Scott Tobias is wary of documentaries that end with a website as a call to action, seeing them more as op-eds than works of film. Park Avenue whips audiences into such a frenzy of class-based rage that it should end not with your requisite website, but rather with a recipe for a Molotov cocktail and an insistent call to violent class warfare.