Batman V. Superman trailer promises a lot of blood and a lot of brooding 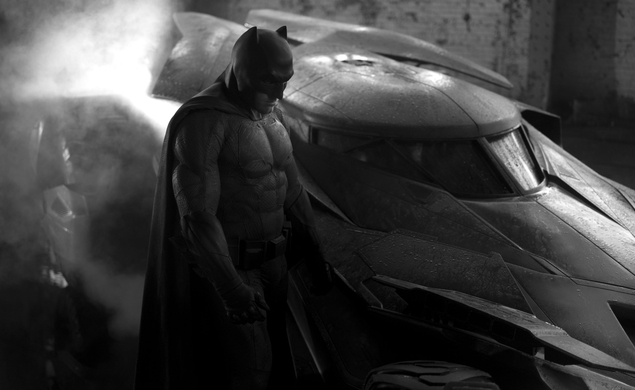 After infiltrating the Internet in a low-res, cell-phone video version Thursday, the (non-IMAX) trailer for Batman V. Superman: Dawn Of Justice received an official release Friday night. Ben Affleck’s face is significantly less blurry this time, though the elucidation does little to alleviate his stoicism. He looks just as blandly miserable in both versions.

In quintessential Zack Snyder fashion, the trailer is dark and dour, with a not-so-subtle sense of nihilism percolating beneath every angry image. There’s so much brooding, so much anger, so much CGI here. One almost wonders if Snyder had some traumatic experience with superheroes as a child, since he repeatedly expunges the heroism from his superheroes, leaving viewers with disconsolate, often violent shells inhabiting a cruel world, which is usually rendered in expensive CGI.

Of course, we shouldn’t make too many assumptions after just one trailer, even one that amassed more than 20 million views in two days. Remember the initial trailer for Man Of Steel? It took viewers by surprise, with its hushed voiceovers and airy, wavering camerawork capturing fleeting glimpses of tranquil meadows and azure sky. It offered few details as to what film was being advertised until the final shot, in which a contrail-streaming Superman transects the sky. It sort of felt like Christopher Nolan by way of Terrence Malick, and viewer expectations soared.

Then the film came out, and the world let out a collective sigh. It’s a muscle car of a film, with an engine for a heart and diesel coursing through its veins. It’s all go-go, pummel-pummel, with little time for humanity. Our own Matt Singer aptly described it as “A deadly serious disaster movie and a deeply silly science-fiction movie about Russell Crowe riding a dinosaur and Michael Shannon talking about ‘World Engines’ and ‘Genesis Chambers.’”

Batman V. Superman looks even darker. It seems that the citizens of Metropolis didn’t appreciate how Superman pretty much destroyed their entire city in his Demi-God fisticuffs with Michael Shannon, as the various voiceovers and CGI-rendered “False God” graffiti suggests.

The problem with Snyder’s style lies in the awkward clash of his super-serious tone and the frequently light nature of his narratives. Tim Burton drew the ire of a lot of protective parents with his 1992 Grand Guignol Batman Returns, a tar-black horror-comedy that turns the Penguin into a genocidal monster and has Batman blowing up people like they’re fleshy party poppers. A gleeful nightmare in the same vein as Poe or Val Lewton, it proudly wears its gothic horror influences the way Hannibal Lecter wears people’s faces. And yet Burton’s movie looks utterly jocular compared to Snyder’s virulent vision. Burton, for all of his flaws, has a sense of humor.

Still, you have to admire Snyder’s persistence. He does display a genuine vision, and he does treat his material earnestly. He deals exclusively in bedlam, crafting acidulous stories about bad people and badder people. His heroes are defined less by their altruism and more by their sheer ability to pummel people who are arguably worse than they are. Some men just want to watch the world burn. Zack Snyder is one of them.