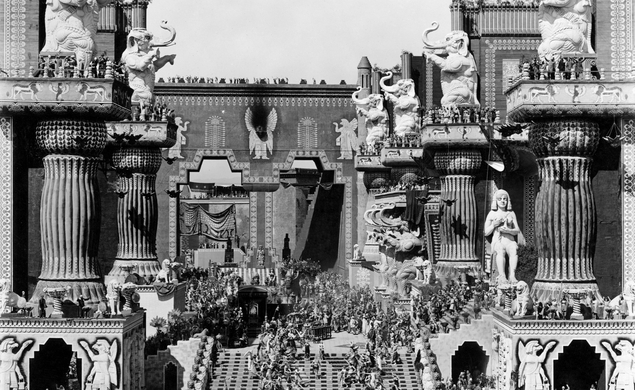 It can be difficult to get people into silent movies, non-comedies especially, because you have to overcome the suspicion that cinema as a medium was still in its infancy and that it hadn’t yet developed the techniques that would make it more dynamic. But much like a parent raising a child, watching that development as it happens can be one of the joys of being a cinephile, because you can see the incredible being it will eventually become. D.W. Griffith’s 1916 opus Intolerance, a production of unprecedented ambition and scale, was a flop relative to its enormous budget and a letdown after his notorious masterpiece The Birth Of A Nation took the country by storm the year before. But Griffith’s four-pronged missive on intolerance throughout the ages—specifically the fall of Babylon, the persecution of Jesus, the St. Bartholomew’s Day Massacre in 1572 Paris, and a common present-day tragedy—remains absolutely thrilling to watch, in part because it seems to get more sophisticated as it goes along. Though Griffith spends the most time on the bookends of Babylon and the present-day, he doesn’t cross-cut between the different time periods frequently, at least at first. But Intolerance builds up a head of steam as it reaches the climax, and though “montage” isn’t precisely the word to describe what the film does in the closing stretch, it has that kind of momentum to it. Griffith’s reputation has been anchored to a degree by the racism of Birth Of A Nation, but he has more range than many assume and more sophistication as a filmmaker than any of his contemporaries. Intolerance isn’t some ossified relic of a bygone era. It’s an eternally vital work of art. Night owls can start watching the film Sunday at midnight on TCM. The rest of us can DVR it.