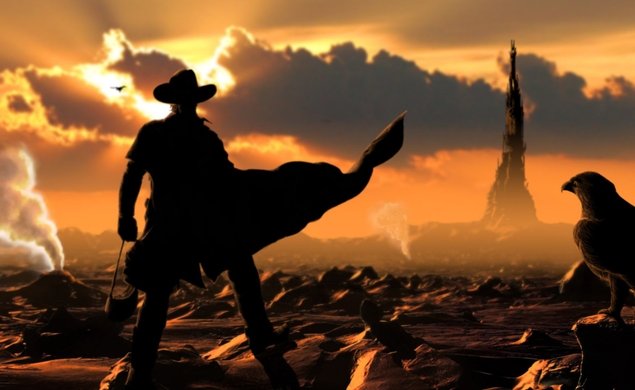 In the cinematic underworld known as development hell, The Dark Tower—an adaptation of Stephen King’s epic, multi-genre story constituting eight novels running some 4,250 pages, in addition to spin-off games and comics—has been a titanic presence since 2010. According to Collider, the project began production that year with Ron Howard onboard to direct an ambitious film trilogy for Universal that would be augmented with television installments.

HBO was eager to produce the TV segments, but Universal nevertheless pulled out, citing concerns over spiraling costs. Then Warner Bros. stepped in, but they too took a pass, even after producer Brian Grazer offered to trim $50 million from the budget. At the time, it must have looked like a project too big and too unwieldy to ever make it onto the big screen, especially considering the novel television element.

In our franchise-obsessed culture, however, nothing is too unwieldy if there’s enough money to be made, and The Dark Tower has a huge following as one of King’s greatest and most popular epics. So it’s not surprising that The Dark Tower is reportedly back on, with Sony swooping in to save it, Howard out as a director but remaining involved as a producer, and a script by Akiva Goldsman (who won an Oscar for his script for Howard’s A Beautiful Mind, but to me will always be the man who wrote Batman & Robin) and Fringe’s Jeff Pinkner.

The script is apparently heavily rooted in the first installment in the saga, The Gunslinger. The television component is now on again as well, though it’s unclear whether the stars of the film will also star in the television segments. Howard and Goldsman previously brought Dan Brown’s The Da Vinci Code and its sequel to the big screen, so they have experience with enormously successful epic fantasy series.

Will Sony be the studio that can finally bring The Dark Tower to the big and small screen? It remains to be seen, but with enough money at stake, seemingly anything is possible where studios are concerned.