Our next Movie Of The Week: The Treasure Of The Sierra Madre 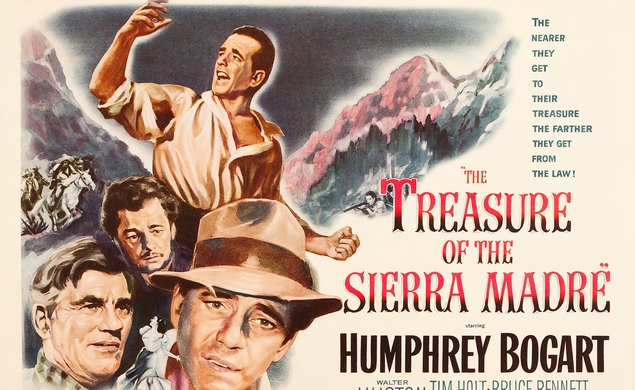 There are any number of historical reasons to watch John Huston’s 1948 neo-Western classic The Treasure Of The Sierra Madre: It was one of the first American films shot on location, in this case in Mexico. It won Huston the Best Director and Best Adapted Screenplay Oscars, and won his father, Walter Huston, the Best Supporting Actor Award—the first father/son win. (Walter claimed in his acceptance speech that he’d ordered his kid to write him a good part for his old man sometime.) It’s been an incredibly influential film throughout the years, leaving a mark on projects from Raiders Of The Lost Ark to Paul Thomas Anderson’s There Will Be Blood, as well as more direct retreads, like Black Sea and A Simple Plan. It’s also the source of the much-quoted (and even more often misquoted) lines, “We don’t need no badges! I don’t have to show you any stinking badges!” It’s worth seeing where that bit of business actually comes from in context—and how often it’s woven into the DNA of any film where a group of people get their hands on a windfall, and start scheming to edge out their partners—or where one of the partners in a windfall situation at least thinks everyone’s out to edge him out.

But briefly leaving aside how the film helps contextualize other movies (and TV shows like Breaking Bad), the real reason to see it is that it’s a fantastic piece of cinema. Walter Huston, Tim Holt, and Humphrey Bogart give powerhouse performances, and John Huston’s screenplay (based on a 1927 novel by the reclusive, never fully unmasked author who wrote under the name B. Traven) is a classroom constant, a model of direct, unfiltered action as a means of forwarding character and the themes of greed and the corrupting influence of money. We’ll be kicking off our conversation on Tuesday with the usual Keynote on the movie’s themes and filmmaking and the Forum expanding the conversation, and follow up on Thursday with a piece about the afterlife of Humphrey Bogart. Stay tuned, and keep your hands off our gold.

Coming up:
April 20: The Conversation
April 27: Hulk
May 5: Little Shop Of Horrors