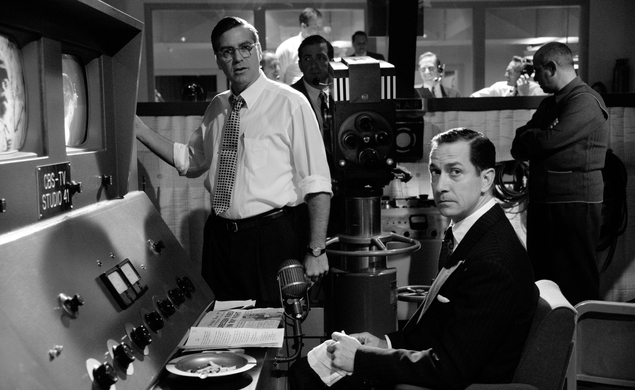 As a filmmaker, George Clooney has never quite reached the promise he showed in 2005’s Good Night, And Good Luck, his sophomore directorial effort  and screenwriting debut. Perhaps that’s because the Edward R. Murrow-centered historical drama represents such a precise distillation of Clooney’s interests: history, politics, and golden-age television, the latter two presumably informed by his father’s career as a TV journalist in the 1960s. It’s not hard to imagine why Clooney, who briefly majored in journalism in college and has always expressed a political bent, was drawn to the story of Murrow bucking against corporate pressure to publicly discredit the tactics used by Joseph McCarthy in his crusade to root out Communist sympathizers in the 1950s: The story is catnip to anyone with a serious interest in journalism, ethics, and the dangers of stifling political debate. (I was getting my master’s in journalism when Good Night, And Good Luck came out, and it was all but required viewing for everyone in my program.) Because of that, Good Night, And Good Luck flirts with blindly idolizing Murrow—played in the film by David Strathairn, whom Roger Ebert rightly called in his review of the film, “that actor of precise inward silence”—but it functions more as a morality play for journalists, or for anyone with an interest in the media. Clooney makes some interesting choices as a director, too, from presenting the film in black-and-white to using archival footage of McCarthy to choosing an evocative jazz score that sets the tempo of the film. The film made a splash when it premiered, netting great reviews and six Academy Award nominations (including one for Clooney as Best Director) but winning none, and it’s since faded from the public consciousness rather significantly. But its ideas about the intersection of public corruption and mass media are more relevant than ever; get a reminder why when the film airs tonight at 7:15 p.m. Eastern on HBO.