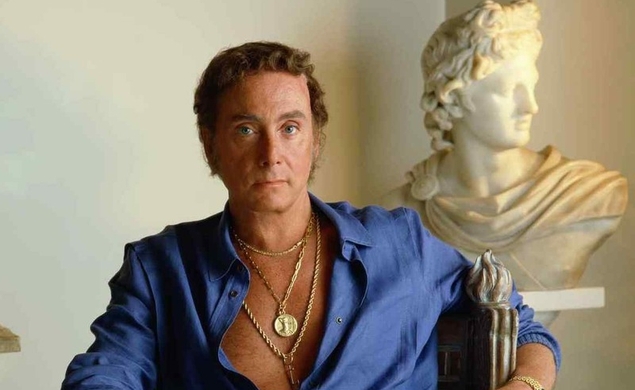 Welcome to the second and concluding entry in Pornographers Month here at Streaming University! I must admit that my primary exposure to Bob Guccione, longtime Penthouse publisher and lover of gold chains, comes from an E! True Hollywood Story about him where Guccione sadly relates how everyone saw Kathy Keeton, the wife he considered his soulmate, as a stripper because that was a profession which she briefly held, when there was so much more to her. There was, Guccione insisted with both pride and sadness in his voice, her famous love of science and the space program, an overriding passion that made her a “friend to the astronauts.”

The phrase “friend to the astronauts” filled me with an unseemly glee. I wanted to repurpose it as quickly as possible, to use it as a metaphor for any unlikely association. Yet watching Filthy Gorgeous: The Bob Guccione Story, I found myself thinking that Keeton could very well be a genuine friend of astronauts. Guccione, who died in 2010, will forever be remembered as a pornographer, but his interests were diverse and varied. In addition to Penthouse, he published Omni and, in its earliest days, Spin. He may have looked like a caricature of a heavy-lidded, machismo-dripping porn king, but he contained multitudes.

The oddly flattering documentary Filthy Gorgeous: The Bob Guccione Story depicts Guccione less as a Larry Flynt-like sleaze and more as the real-life equivalent of Jack Horner, Burt Reynolds’ character in Boogie Nights. Filthy Gorgeous posits Guccione as something of a contradiction: an honest sleaze, a pornographer with ethics and integrity, a man who made his fortune with naked women but considered himself an artist. Where Flynt—the subject of the previous entry in Streaming University’s Pornographers Month—came to printed pornography as a strip-club proprietor, Guccione was first a painter and later a photographer. He genuinely cared about the aesthetic quality of the women being filmed and apparently—this was a shock to me—cared about the quality of the articles in Penthouse as well.

Penthouse couldn’t afford the same caliber of writers as Playboy, but the film nevertheless presents Penthouse both as a vital forum for important writers, often of the science-fiction variety, as well as a mouthpiece for Guccione’s strong, idiosyncratic political beliefs. Guccione was staunchly pro-Vietnam War and made a special campaign of reminding readers to honor returning veterans. He was fiercely anti-corruption, despite a widespread belief that this Italian-American pornographer must be in cahoots with the mob. When the Abscam scandal came around (over-dramatized in American Hustle) and a fake sheikh went around trying to bribe the sum of American power-breakers, Guccione was reportedly the only person approached who refused to play ball. Sure, Guccione had the gold chains and manfully unbuttoned shirts of a macho alpha-male, but Filthy Gorgeous suggests it was camouflage so that people wouldn’t see the shy, introspective, and fundamentally serious man behind the empire of flesh and debauchery.

Guccione was surprising in other ways as well. He was neither a smoker nor a drinker, preferring a Tab to champagne and a home-cooked meal with his family to a night out at Plato’s Retreat. He was the object of intense affection for those who worked for him—with the exception of the crew of Caligula, his Jack Horner-like attempt to create the world’s greatest pornographic film, one with great actors and studio-level production values and a respected screenwriter in Gore Vidal. Guccione wasn’t just going to make smut: He was going to make art, a movie that really mattered (even if he had to sneak in at night and film additional sex scenes with Penthouse pets himself).

Hugh Hefner, Flynt, and Guccione were each lucky to stumble onto naked pictures of women seemingly the whole world wanted to see. Hefner had Marilyn Monroe, Flynt had Jackie Onassis, and Guccione had Vanessa Williams, a Miss America who had previously posed nude for some pretty artfully shot pictures. The Williams issue was designed to poke at the hypocrisy of a culture that leered at Miss America contestants in the swimsuit competition, then grew angry and judgmental once an invisible line was crossed. But it was also designed to sell a massive number of issues, which it did.

Filthy Gorgeous depicts Guccione as a man obsessed with science fiction and the future, who nevertheless failed to grasp the dramatic ways his own industry was changing. Home video never held much interest for him, nor did the Internet, and a man devoted to creating printed images for people to masturbate became a man out of touch with the 21st century, or at least an adorable anachronism. Guccione—who sunk a fortune into Penthouse Casinos and lost so much he was forced to sell his remarkable art collection—emerges here as an unexpectedly sad figure, a man of the mind wrapped up in the dirty business of the flesh who took pleasure in work, sex, cooking, and family, but seemed cursed with a fundamental melancholy, forever doomed to be second best no matter how furiously he worked. Guccione would like to have been remembered as a painter and an artist whose soulmate was a friend of the astronauts, but he’s doomed to be remembered for much different, more sordid things.