Our next Movie Of The Week: Romy And Michele’s High School Reunion 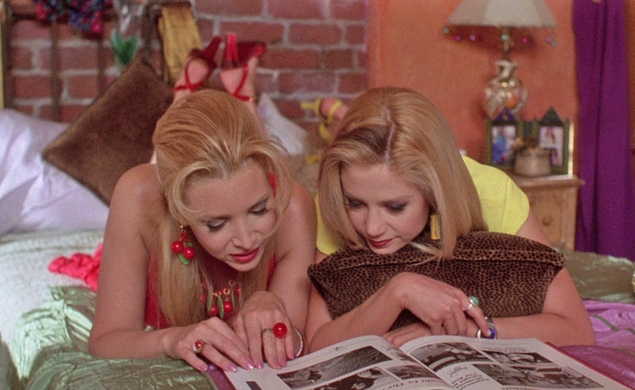 As we head into the final week of Buddy Comedy Month (well, Month And A Few Days) here at Movie Of The Week headquarters, a little brain-teaser for our astute readers: What have all four of the movies covered thus far (Artists And Models, The Odd Couple, 48 Hrs., and Midnight Run) have in common? Go ahead, I’ll wait.

That’s right, they’re all about dudes! That makes a certain amount of sense, as the genre is historically weighted heavily toward bro-bro pairings. Hell, the first section of the Wikipedia entry for “buddy film” is “Male-male relationships.” There aren’t a lot of female-led buddy films out there, and even fewer female-led buddy comedies, but we’re wrapping up this theme month with one of the standouts of this very tiny sliver of the genre: 1997’s Romy And Michele’s High School Reunion.

Directed by former Newhart and The Simpsons showrunner David Mirkin, and adapted by Robin Schiff from her own stage play, Ladies Room, the film stars Mira Sorvino and Lisa Kudrow as the titular duo, a pair of lifelong friends who never let their ditziness stand in the way of having a good time. But both their no-cares outlook and their friendship is tested with the approach of their 10-year high-school reunion, which challenges them both—Romy especially—to confront the fact that they haven’t really accomplished all that much since they graduated. Their journey to and through the reunion is filled with flashback, fantasy, and dance sequences, plus a fair amount of old-age makeup—and it’s all as fun and frivolous as the gals themselves. But though it’s a candy-colored confection filled with late-’90s fashion statements, Romy And Michele has some great messages about being true to yourself and, especially, the importance of friendship. It also has many, many quotable lines, which you should start brushing up on now in preparation. Here, I’ll start with a personal favorite: “Would you excuse me? I cut my foot before and my shoe is filling up with blood.”

Our Romy And Michele discussion kicks off next Tuesday with my Keynote essay on the  film’s approach to fantasy and ambition, with an accompanying Forum discussion between Keith and Rachel. Then on Thursday, Kate Erbland will look at the film as an exemplar of female friendship, something the movies have had a historically hard time depicting. Join us, won’t you? We promise a good time, and at least one great dance set to “Time After Time.”

Coming up:
April 7: The Master
April 14: The Treasure Of The Sierra Madre
April 20: The Conversation
April 27: Hulk