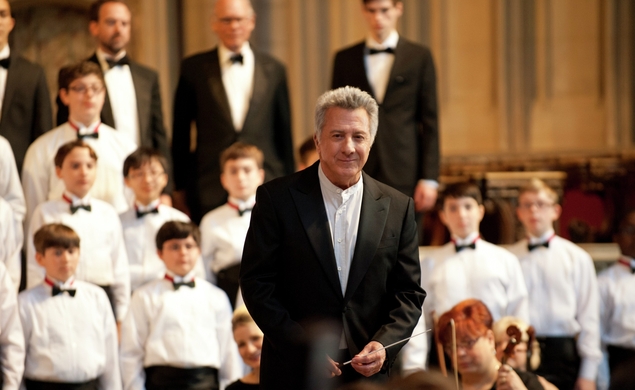 Growing up as a theater nerd who willingly gave up her lunch period to sing in her high school’s choir, I never experienced the life-altering, music-based epiphanies that seem to rain down indiscriminately on troubled young kids in movies. I mean, granted, I didn’t totally fit the needs-to-be-saved-by-music profile—I wasn’t a cocky rebel with so much potential but so little ambition, or an angry, misunderstood kid who dumped trash on her peers to hide my deep fear of failure, or an unassuming orphan/janitor/coal miner’s son who just needed one chance to prove my worth to the world. But still, I would’ve enjoyed being mentored by Meryl Streep a la Music Of The Heart, or being pushed to my limits by a demonic, Whiplash-type teacher who screamed at me until I learned how to play drums good, or stumbling upon a Jack Black-esque substitute teacher who helped me reach my true rock ’n’ roll potential.

That’s why, at first, I was intrigued by Boychoir, the latest entry in the music-will-solve-all-of-your-problems genre. But Boychoir appears, at first glance, to be one of the most predictable, least self-aware, and toothless takes yet. The new trailer sees Dustin Hoffman stepping into the role of “tough-but-tenderhearted mentor who is stringent as fuck but just wants to BRING OUT THE BEST IN YOU, DAMMIT”; Garrett Wareing as the “poor kid who’s angry at the world and everybody hates him, except he’s also, like, the best singer ever, and he’s gonna save the school!”; and Josh Lucas as the “absentee father who just doesn’t know how to connect with his troubled son so he’s gonna just let the other guy do it.”

Rather than transcend these tired tropes, the trailer bolsters them with treacly, rickety dialogue. My personal favorite moment happens around 1:03, when Hoffman brings the reverse psychology very, very hard. “How dare you squander your talent?” he growls at the wild-eyed young Stet (yes, that’s our young protagonist’s name). “Music means nothing to you. Quitting. Is. All. You. Know.”

All of this aside, though, the boy choir in question sound really, really great. Stet’s got what it takes! So maybe we can forgive all of these other sins and allow the music to, you know, change our lives and stuff? Let’s watch it together a few times and see:

Again, the lush music of Boychoir shouldn’t be ignored—and the few reviews that have trickled in reflect this. But outside of that, it seems—in an ironic twist!—Boychoir might be wasting its own potential. Couldn’t it have tried a little harder? Does it even know how good Dustin Hoffman can be? Kathy Bates and Debra Winger are here, too! How DARE it squander its talent?