Dan Harmon has problems, and so does Harmontown 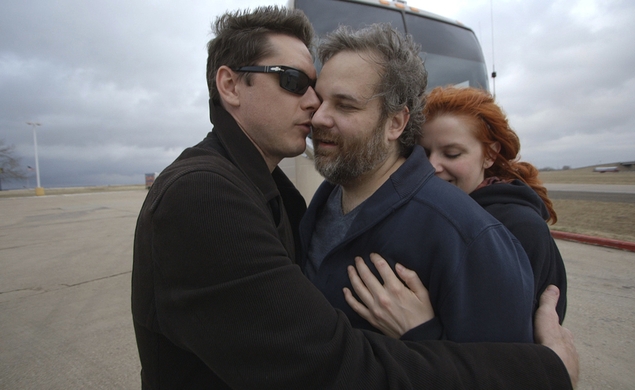 Separately and together, the Conan O’Brien documentary Conan O’Brien Can’t Stop and the Dan Harmon documentary Harmontown unwittingly offer a guide on how to cope healthily with losing a high-profile television program in the blinding glare of the media spotlight. Get some rest. Take plenty of naps. Go to therapy a few times a week and strongly consider at least a short-term course of anti-depressants and anti-anxiety medication. Read some books you’ve been meaning to get around to since college. Spend lots of time with your family and friends discussing what happened to you, but also engage with their lives and their concerns as well. Despite what it might feel like, even if you lost a show and a lot of people are worried about you, you are not the only person in the world. You are particularly not the only person in the world who matters, though your depressed and rejected brain might think so.

What Harmontown and Conan O’Brien Can’t Stop (whose title seems more like a warning than a boast by the end) strongly, if unwittingly, suggests people who’ve lost shows don’t do is immediately embark on a grueling cross-country tour and have a documentary crew chronicle their antics. Yet when Conan lost The Tonight Show (apparently there were some scheduling issues involved regarding the show of his lead-in, journeyman comic Jay Leno) and Dan Harmon was temporarily removed from his television baby Community, that’s exactly what both men did. When things got bad and fans started worrying, Conan and Dan Harmon did what men at a personal and professional crossroads and in crisis often do: they get the hell out of town and hope that, in the process of running away from themselves and their problems, they will, in a Zen paradox, find themselves and the answer to their problems. Conan O’Brien Can’t Stop and Harmontown are both curious propositions in that they seemed to be baiting me to hate the creators of some of my all-time favorite television shows. Both films bank hard on audiences’ feverish love for their subjects in ways that sometimes come across as desperate and, at other times, feels disingenuous.

Harmontown, director Neil Berkeley’s follow-up to the delightful Wayne White documentary Beauty Is Embarrassing, follows Harmon, girlfriend and foil Erin McGathy, non-girlfriend and sidekick Jeff B. Davis, and a hirsute young man named Spencer who was plucked from obscurity to be the tour’s official dungeon master, as they tour the country in a van, performing live episodes of Harmontown to the delight of their worshipful geek army. Spencer has another essential role to play as well: He’s both the audience surrogate and the embodiment of every Community superfan’s desire to go from worshipping at the altar of this most meta and outsider-friendly television show to being a part of it. And since Harmontown essentially posits Harmon as being Community in human form, then being part of a Harmon tour is akin to being on Community. It’s not surprising that the final shot of the film is Spencer on the actual Community set, the evolution from fan to participant complete.

Part of what makes Harmontown so accidentally poignant is that Harmon is an inveterately self-obsessed narcissist rattling around in the prison of self, who desperately wants to make meaningful connections with the world around him—whether that means his girlfriend, his dungeon master, or a nerd army of fans who go to live Harmontown tapings to bask in Harmon’s reflected glow and give him the bottomless validation and attention that he angrily demands.

Early in the film, Harmon makes a characteristically meta joke about faking a shot of fans approaching him worshipfully and triumphantly in slow-motion to create the impression that he’s triumphed before his strange little act—not quite stand-up, not quite confession, not quite a free-flowing conversation, but a combination of all three—has even began. Yet Harmontown is non-ironically full of those kinds of shots of nerds laughing uproariously with a golden glow in their eyes, which convey that Harmon doesn’t just make them laugh, he also represents them and every other outsider on a profound level. Yet that relationship is decidedly one-sided, and that connection inherently glib and superficial, more a matter of signing a poster and taking a photograph than taking the time to really connect with the people at his shows as anything other than worshipers and acolytes. Harmon seems to relate to his fans not as equals, but rather as a God might his creations.

As a fan of Community, Harmon, and Harmontown, I was hoping to violently disagree with my colleague Scott’s depiction of Harmontown as a self-congratulatory vanity project—in Scott’s eloquent turn of phrase, “Harmon emerges as sour and abusive, an unrepentant man-child who treats his fans as enablers. Their love hits him like kerosene striking flame.” I agree wholeheartedly with Scott’s review, however, and I write that as someone who desperately wanted to like the documentary but found it oddly charmless.

How painfully ironic that Harmon, a man famous for creating a television show without a laugh track or a worshipful live studio audience guffawing at every half-joke and tearing up at every moment of dewy sentimentality, would take center stage in a documentary brought down by all of those regrettable qualities. Then again, what do I know? Harmon seemed to be free-falling in Harmontown as much as a man with two separate pilot deals possibly can (and that’s not even including Community, which later welcomed him back), and O’Brien’s doing just fine. So maybe the cross-country-tour/documentary combo is just the kind of shock therapy comic geniuses need to get their mojo back. If making these films proved cathartic for Harmon and O’Brien, then at least someone got something out of them.