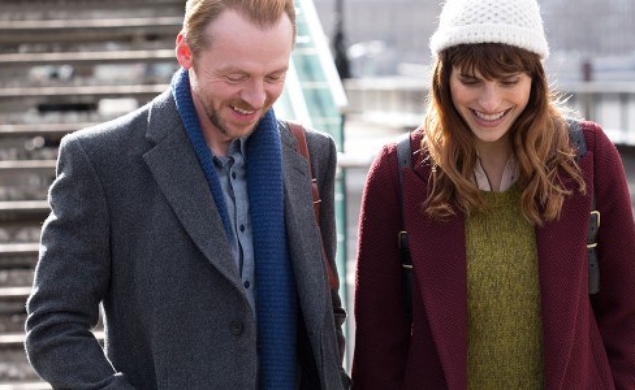 Simon Pegg has enjoyed a terrific run as Edgar Wright’s muse, co-writer, and star in projects like the television series Spaced and the Cornetto Trilogy of Shaun Of The Dead, Hot Fuzz, and The World’s End. He’s also been a welcome presence in the Mission: Impossible and Star Trek franchises, but his track record as a leading man is fairly shaky. He failed to make the loathsome Sidney Young charming in the misguided tell-all adaptation How To Lose Friends And Alienate People, couldn’t redeem the muddled comedy Run, Fatboy, Run, and helped Hector And The Search For Happiness and A Fantastic Fear Of Everything earn terrible reviews en route to flopping.

We recently ran the trailer for Kill Me Three Times, a change of pace for the charming actor that finds him playing a murderer-for-hire; now, Pegg is being paired opposite the utterly delightful Lake Bell in the less-than-delightful looking romantic comedy Man Up.

Even by the exceedingly lenient standards of the contemporary romantic comedy, the plot strikes me as particularly ridiculous and convoluted: Bell plays a woman who meets a woman on a train who is en route to a blind date with a book she will use to identify herself to her unknown potential suitor. But through some manner of motherfuckery, the telltale book ends up in Bell’s hands, and when Pegg spots her with the book and mistakes her for his blind date, she decides to just go with it.

Being characters played by Pegg and Bell, the pair hit it off, but can their burgeoning relationship survive the inevitable moment Bell has to come clean, and, to use a resonant phrase, “man up” about her duplicity? If you do not want the film spoiled, do not click on the trailer, which is full of scenes that must be from the third act and give away too much of the plot.

Can actors as delightful as Pegg and Bell redeem a cornball premise? It remains to be seen.