Sony wants to retell Romeo & Juliet through a 300 style lens 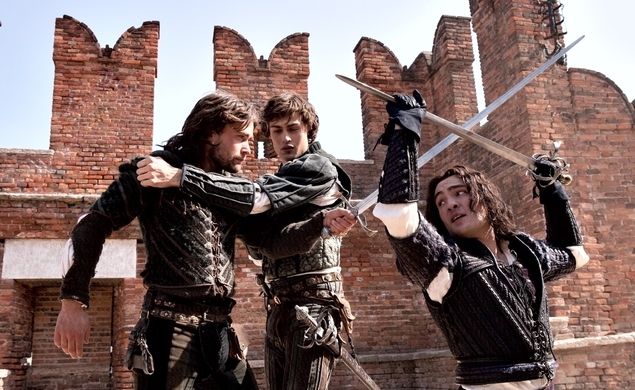 Shakespeare is about to lay his scene in a setting even the prolific scribe probably could never imagine: 300.

The Hollywood Reporter shares that Sony is in final negotiations to buy Verona, a retelling of the classic Romeo & Juliet story that reportedly “reimagine[s] the classic love story through a lens of an epic, 300-style world.” Often, it seems as if Hollywood is just playing one massive game of Mad Libs, and while Shakespeare’s plays have always lent themselves to all manner of reimaginings and reworkings (Ed Harris as a motorcycle-riding, gun-toting drug gang leader? Shakespeare!), this one seems particularly random. The screenplay was penned by Gavin James and Neil Widener.

Perhaps back in 2006, when 300 took the world by sudden, stuttering storm, thanks to its mix of comic-book action and highly (overly?) stylized trappings, this move would have made a smidge of sense, but we’re already living in a post-post-300 world. Even 300’s own sequel, 300: Rise Of An Empire, made half the box-office take of the original, and interest in this specific style of storytelling seems to be on the wane.

Also, it just sounds ugly. Shakespeare’s stories have consistently been used as the basis for all sorts of adaptations and interpretations, from the obvious (like 2013’s mostly faithful and mostly boring take on Romeo & Juliet) to the creative (Baz Luhrmann’s Romeo + Juliet, still my favorite version of the story) to the unexpected (She’s The Man), and those are just examples plucked from very recent history. It’s bonkers to demand total fidelity to Shakespeare’s stories in the cinema, but throwing his most beloved tale into the world of 300—because it looks cool?—seems cheap, an easy way to bolster interest in a property just because it comes from a recognizable backstory. Surely, there are better ways to open up this particular story—there are a bevy of Romeo & Juliet stories that are centered on Romeo’s first love Rosaline on the market, including the planned adaptation Rosaline, which has Felicity Jones attached as the eponymous dumpee—than to gussy it up in played-out clothes.