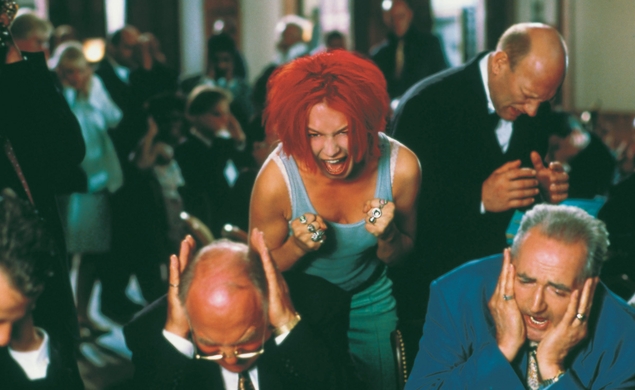 Long before German writer-director Tom Tykwer partnered with the Wachowskis on the bulky, stately Cloud Atlas, he made a name for himself with a few unmissably strange and specific arthouse projects, the kind that attract attention for their visual verve and specificity, even among people who dismissed the narratives out of hand. The first, 1998’s Run Lola Run, was stylish and compelling enough to top the year’s box-office list in Germany, and it also broke Tykwer out of the era’s foreign-film ghetto and found him a considerable American audience. It’s a weird sort of crowd-pleaser, with animated interludes, a hyperactive camera, tricky editing, jumps in time, twists more driven by impressionism and emotion than any particular story logic, and a relentless techno score that drives the whole film with the speed and force of a racing heartbeat. The film centers on Lola (Franka Potente), whose hapless criminal boyfriend manages to lose the bag of cash he’s supposed to deliver to his boss. When he calls her in a panic and tells her he has 20 minutes to replace the money, and he’s planning to rob a grocery store in broad daylight out of sheer despair, she takes off running, looking for a fast way to save him. The story’s unconventional way of leading her to answers is much of the fun, but there’s also just a breathless energy in watching her throw herself into her unlikely goal. Run Lola Run airs at 10 p.m. (and also, for you insomniacs and third-shifters, 6:05 a.m.) on Starz Cinema.