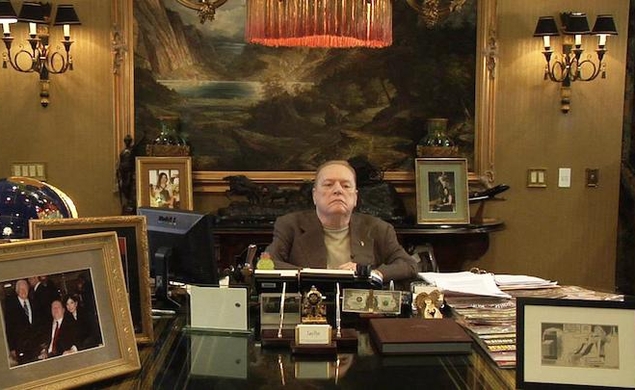 Playboy was, and remains, a famously aspirational lifestyle/publication. For decades, it has taunted the average red-blooded heterosexual men with airbrushed images of women they could never possibly hope to bed in real life. And even if readers somehow managed to get Miss April into bed, there’s a good chance that, thanks to the brilliance of the publication’s photo editors, lighting directors, and airbrush artists, the naked real-life Playmate might not look all that much like the impossibly perfect simulacrum found in the magazine. Playboy goes on to tantalize readers with sleek admonitions to buy cars, watches, vacations, and other luxury goods they couldn’t possibly afford as the cornerstone of a lifestyle only Hugh Hefner, George Clooney, and maybe Robert Evans have the resources to actually live. Hustler, by comparison, offered an antithetical approach. If Playboy was aspirational, Hustler was slumming on the tawdry side of town, a low-rent, anything-goes strip club in magazine form that seemed as fascinated by its ongoing meta-narrative as it was with the world it so crudely and pungently chronicled.

What Hustler lacked in class and sophistication it made up for in raunchy, balls-out personality and shamelessness. Just as Playboy represented the ideals of its highbrow, respectable founder, Hustler was Larry Flynt in journalistic form, equal parts prankish provocation and unabashedly lewd pornography. According to Back Issues—an entertaining documentary directed by the son of a former Hustler employee—where Playboy offered impossibly perfect boobs and butts, Hustler’s secret weapon was what it referred to as “the pink” (or female genitalia, photographically rendered for the enjoyment of the trenchcoat set).

For Hustler in Back Issues, the concept of “the pink” extends to more than just brazenly eschewing Playboy’s bashful reluctance to show vaginas; it meant flying the flag for the repressed and disreputable, for taking what society was reluctant to talk about and screaming about it from every corner. The magazine was obsessed with “the pink” to a degree that borders on comic. The interview subjects talk of the difficulty of lighting vaginas, and how the magazine ended up using the same image of a woman raptly staring at her vagina in a small mirror as it lets out an otherworldly glow, as if “the pink” weren’t just more attractive and acceptable than those fuddy-duddies at Playboy imagined—it was also the luminous portal to an alternate world.

Back Issues benefits from a rich strain of comedy derived from the sometimes surreal juxtaposition of the practical details of having to grind out a magazine at a regular clip and the obscenely lurid contents of that magazine. Nina Hartley, one of a number of industry members interviewed, talks amusedly of the default expression of open-mouthed bliss found on Hustler models, which was supposed to convey orgasmic satisfaction but to her suggested something much deader and more homogenous.

Back Issues covers the basics, from Hustler’s beginning as a flier designed to advertise Flynt’s low-rent strip clubs to its eventual national prominence and the crazy melodrama that characterized its golden age, when the magazine seemed to be a pornographic version of National Lampoon behind the scenes, all out-of-control debauchery and anti-authoritarian shenanigans. The film covers Flynt’s famous conversion to Christianity at the hands of Jimmy Carter’s sister, as well as the most famous and disturbing cover the magazine ever produced. Flynt wanted to convey that he had turned a corner, and that he and Hustler would no longer treat women like pieces of meat, though the image he chose to get across his message—a headless woman whose flesh has been ground up in a meat grinder so that it looks like hamburger meat more than anything human—couldn’t have conveyed it worse or in a more horrifying fashion.

Flynt using that particular image to signal to women and the women’s rights movement that the magazine had evolved in its gender politics would be like a newspaper trying to reassure readers that they would be less anti-Semitic in the future with a cover depicting Anne Frank being impaled by a swastika. The traumatizing nature of the imagery so outweighed the message that the message was not only lost but reversed. What was meant to be a bold image against sexism instead registered to the non-Flynt eye as the most violently, grotesquely sexist abomination conceivable.

Back Issues chronicles Flynt’s equally intense embrace of atheism just as compellingly. Flynt lived his magazine to the point where it almost killed him. He antagonized the press, scared off potential advertisers, just barely survived an assassination attempt, got addicted to hard drugs, experienced a tragic romance with soulmate Althea, and lived to become an unlikely first-amendment martyr and the subject of an Oscar-nominated biopic.

The filmmakers talk to Larry’s brother and partner Jimmy, who manages the seemingly impossible feat of being the creepier Flynt brother when he talks about oiling up models in ways that will make audiences want to take a scalding shower that last weeks. But if Back Issues prints the legend, it also finds interesting new angles, like the revelation that Flynt was trumped by rival Al Goldstein’s Screw in publishing naked pictures of Jacqueline Kennedy Onassis—but because Screw was such a black-and-white, New York-centric shit rag, nobody paid much attention until unclothed images of the world’s classiest woman appeared in the world’s least classy magazine.

Back Issues approaches Hustler with rapt fascination, good humor, and an utter lack of reverence that feels perfectly suited to its subject matter. I’d read a memoir by a longtime Hustler editor and saw The People vs. Larry Flynt (which, like Milos Forman’s Man On The Moon, paid tribute to the violently irreverent spirit of a man who hated sentimentality with an incredibly reverent, sentimental biopic), and I still learned new things from this documentary, like the magazine’s experiment of letting people like Dennis Hopper, Frank Zappa, and Marjoe Gortner direct insanely expensive pictorials. Maybe it’s a measure of being 38, but for me, the appeal of a documentary about Hustler is the opposite of the magazine’s appeal to a 14-year-old. It’s all about the colorful, crazy, larger-than-life stories. The naked girls are little more than a distraction.