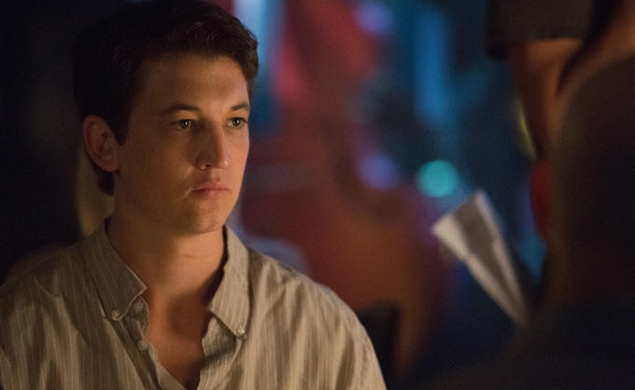 In a universe freed from the ubiquity of Chris Pratt and Channing Tatum, Miles Teller is Hollywood’s hottest young commodity right now. He blew audiences away with his go-for-broke performance in Whiplash last fall, but Teller’s now poised to make 2015 his year. He’s got three releases coming down the pike this year: He’ll really stretch his range as an actor to play Reed “Mr. Fantastic” Richards in the Fantastic Four reboot, then he’ll log another tour of duty in the Insurgent franchise, rounding out the year with a performance as boxer Vinny Pazienza in Bleed For This.

So the boy’s got 2015 locked down, that’s all set. Teller’s next order of business is laying plans to dominate 2016, plans which are coming along quite nicely so far. Teller has signed on to lead in The Only Living Boy In New York, the indie that will hopefully lead Marc Webb out of the Amazing Spider-Man wilderness. No release date on that one has been announced as of yet, though a 2016 release makes the most sense on their timeline. Rounding out Teller’s 2016 CV will be The Life And Times Of The Stopwatch Gang, a true-life story adapted from a recent article on Atavist. Teller will star in the retelling of the crime syndicate so named for their speedy robberies, fleecing a bank within the span of minutes during the reign of terror in the 1980s. In fact, the Stopwatch Gang was so ruthlessly efficient, legend has it that they never had to fire a single bullet.

The film will be directed by Ruben Fleischer, who we remember fondly as the guy behind the very funny Zombieland and the considerably funny 30 Minutes or Less. Unfortunately, this Stopwatch Gang project reeks of his most recent film, the star-studded disappointment Gangster Squad. Probably remembered more for its last-minute release delay to excise a scene uncomfortably reminiscent of the Aurora, CO shootings from the print, Gangster Squad assembled a heavy cast (Ryan Gosling, Emma Stone, Sean Penn, and Josh Brolin star) to squander their talents on creaky accents, drab dialogue, and over-the-top violence.

Hopefully, Fleischer learned a valuable lesson or two from that film, and can right past wrongs with his new film.