Diane Keaton and Morgan Freeman are old, moving in the trailer for 5 Flights Up 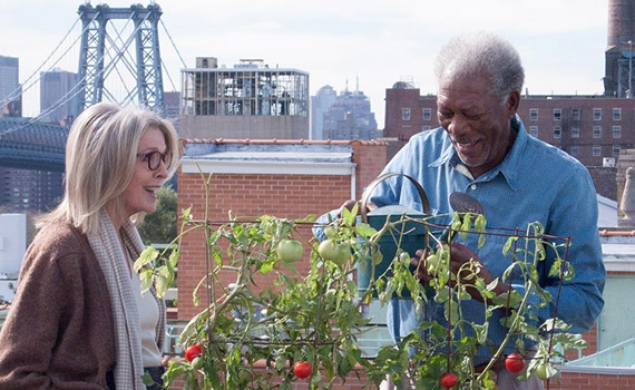 If you’ve ever longed to hear Morgan Freeman wrap his sonorous voice around the phrase “hipsters” in a trailer for what appears to be the most geriatric film in existence, then you are in luck! 5 Flights Up casts the eternally twinkly eyed Freeman and the perpetually sassy Diane Keaton as a couple of a certain age who decide to sell their old apartment and move to a new neighborhood. Low-key shenanigans ensue as these old dogs try to acclimate themselves to the scary, intimidating world of New York real estate.

Even Freeman and Keaton seem bored in the trailer, and the hjinks on display are of a decidedly middle-of-the-road variety. The edgiest gag in the trailer involves a prospective buyer growing medical marijuana. But an audience that angrily demanded not one, but two movies about The Best Exotic Marigold Hotel and made Freeman’s Bucket List a sleeper hit and a household phrase might be able to transform this sleepy little comedy drama (which I like to think of as Morgan Freeman And Diane Keaton Are Old And Moving, Apparently) into a success.

The film is an adaptation of the novel Heroic Measures by Jill Ciment, written by screenwriter Charlie Peters, who previously visited this kind of middle age, bland tedium through films like Three Men And  A Little Lady, Passed Away, and My One And Only. The X factor is director Richard Loncraine, who made his debut with the fascinatingly scuzzy, revisionist rock and roll vehicle Slade In Flame, but it’s doubtful this will retain any of the grit or irreverence that made that film such a delightful sleeper.