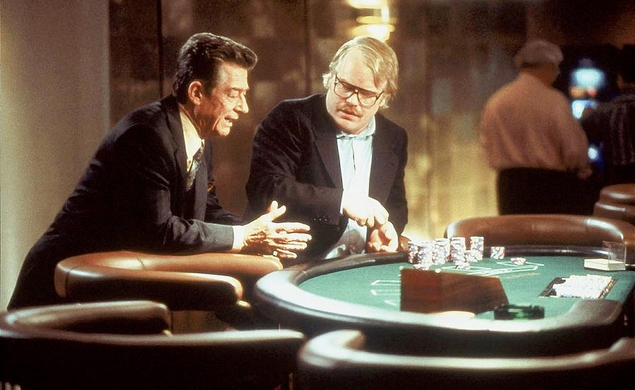 As our recent Career View drove home, Philip Seymour Hoffman had a talent for playing compulsive characters. That talent is on full display in Richard Kwietniowksi’s 2003 film Owning Mahowny, in which Hoffman plays Dan Mahowny, a character inspired by a real-life Canadian bank employee who, in the early 1980s, fueled his addiction to gambling by embezzling $10 million. Keying off Hoffman’s performance, it’s an understated film of slowly escalating tension. Nicknamed The Iceman, Mahowny keeps his emotions beneath the surface as he goes about the business of absconding with funds and then gambling them away during weekend trips to Atlantic City. A talented director with a too-small filmography that also includes the terrific Love And Death On Long Island, Kwietniowksi surrounds Hoffman with a talented supporting cast that includes Minnie Driver (as a fiancée who ought to notice something’s up), Maury Chaykin (as Mahowny’s bookie), and John Hurt (as a slick casino manager who milks the situation for all it’s worth). The situation takes a turn for the dramatic, but even as he breaks down, Hoffman keeps his character’s central mystery intact. He can’t stop because he can’t stop. If there’s another explanation, the film never offers it. Owning Mahowny airs at 2:20 p.m. ET on Starz Cinema.