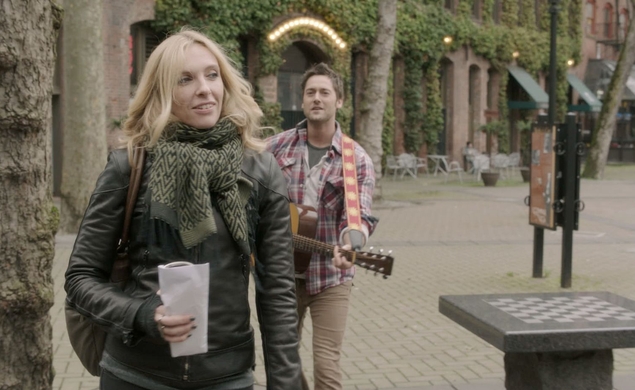 Movies rarely get entertainment journalism right, but these days, it’s especially difficult, since the industry and the work has been changing so radically and so quickly. Megan Griffiths’ wry comedy-drama Lucky Them isn’t particularly accurate about the work, but it gets the industry shift right, and the feelings of instability and loss that go along with it—and it uses those emotions as background for a well-balanced story that’s equal parts delayed coming-of-age story, road-trip comedy, mismatched-buddy comedy, and relationship drama. Toni Collette, who has possibly never been better in a role, stars as Ellie, a longtime feature writer at a Rolling Stone-like magazine. She used to be a superstar, as a chronicler of (and sometimes groupie to) hot up-and-coming bands. But as the magazine heads toward digital-only release, and her long-form journalism falls out of fashion, she stands to lose her job. So her boss (Oliver Platt) gives her a career-saving assignment: Find out what really happened to her old boyfriend Matthew Smith, a star who disappeared without notice and may have committed suicide. Ellie launches a road trip to track Matthew, but she’s forced to cooperate with prickly, obnoxious acquaintance Charlie—played by Thomas Haden Church, in an endlessly scene-stealing role. Charlie and Ellie’s banter gives Lucky Them a lot of its dry wit, but Collette’s charm and warmth as a deeply flawed character trying to find her feet in her work life, personal life, and love life gives it a lot more flavor and warmth. The movie airs at 11:30 a.m. and 6:15 p.m. on Showtime Showcase.