All ThIs Mayhem explores the seedy side of pro skateboarding 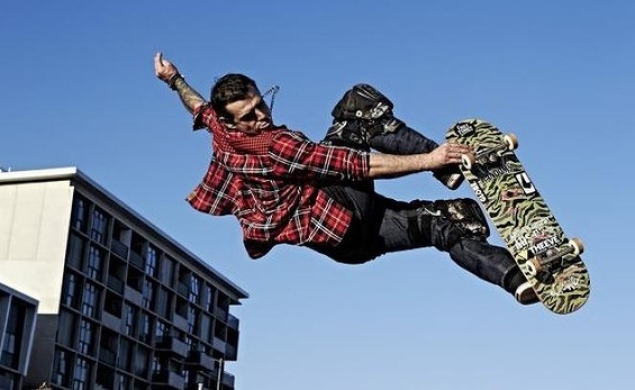 Title: All This Mayhem
Director: Eddie Martin
Streaming on: Netflix
Primary focus: The Pappas brothers
Secondary focus: The dark side of professional skateboarding

It’s tempting to call Tas and Ben Pappas, the Australian skateboarding prodigies who are the stars and subjects of the documentary All This Mayhem, the bad boys of professional skateboarding, but skateboarding in its highest tiers seems to consist of nothing but bad boys. Calling the Pappas brothers the bad boys of skateboarding is like calling Jenna Jameson the sex star of pornography: more than a little redundant.

It’s more useful, and notable, to call Tony Hawk, the Pappas’ primary competitor, the good boy of skateboarding. I’d never appreciated just how apple-cheeked, wholesome, and All-American Hawk is until this documentary. He really is the Leave It To Beaver of the skateboarding world. One of the folks interviewed in All This Mayhem says Hawk is a good businessman. In this context, that is not exactly a compliment. Instead, it’s a way of saying that Hawk is mainstream, dependable, and, more than anything, safe.

The same could never be said about the Pappas brothers, a pair of poor, rowdy kids from Australia who displayed a remarkable talent for skateboarding at an early age. They put in the proverbial 10,000 hours on ramps and skate parks and were rewarded for their hard work with all the spoils that have historically spoiled gifted but emotionally stunted young men. There were the groupies, of course, young woman who just wanted to be close to the brother’s magic, but more importantly, and more disastrously, there were drugs.

At first, drugs were simply part of the grand gestalt of being young, famous, and blessed with more money and attention than you know what to do with. They were for celebrating, but also for passing time and numbing the painful injuries that are an inveterate, if seldom-discussed, part of every major sport.

After a certain point, however, the drugs became an end unto themselves, and the brothers’ predilection for partying and cocaine use began to overshadow what they were doing on their skateboards. And always there was Hawk, the teacher’s pet with the keen business sense and unerring gift for self-promotion who scooped up the sponsorships and awards and money the belligerent and abrasive Pappas brothers felt belonged to them.

So while Hawk’s star never stopped rising, the brothers eventually began to free-fall, first professionally and then personally. Ben stopped skateboarding altogether, and when he was busted trying to transport $50,000 worth of cocaine into Australia, his life was essentially over. As one of the brothers wryly notes in the movie, skateboarding was supposed to be their ticket out, their way of escaping the poverty and grimness of their hometowns and conquering the world. But the boys ended up gravitating toward the same dark forces that would probably have ensnared them even if they’d never picked up a skateboard: the wrong women, drugs, self-destructive rivalries, and ultimately, prison and death.

I have written before that movies have a way of making all junkies alike, reducing them to a single-minded quest for drugs that frequently leads to prison, the grave, or at the very least, very poor decision-making. All This Mayhem certainly suffers from the one-size-fits-all model of films about the drug-addled and self-destructive. Though we’re treated to plenty of footage of the brothers both in action and behind the scenes, they never come into clear enough focus for their particular tragedy to really register.

Yet even for a story of wasted youth and squandered talent, All This Mayhem is particularly grim as it nears its end game. Ben devolves into a nightmarish downward spiral with the help of a partner who’s less of a girlfriend than a drug buddy and enabler who meets a dark end not long before Ben himself dies tragically and predictably young.

Tas talks about his strong desire to avoid his brother’s destiny and provide for his family by skateboarding all over Australia, but it isn’t long until he’s back on drugs and following his brother’s path to the grave all too closely. Throw in the death of their father, and just about the only glimmer of hope is that the film ends with Tas still alive, albeit following a stint in jail for domestic abuse.

Did I learn anything from All This Mayhem that I didn’t already glean from better documentaries about American skateboarders, most of which were directed by Stacy Peralta (who is also a character in most of them)? Not really, but I’m a sucker for these kinds of stories all the same. Even when you know that a subject’s tale will end tragically, there’s something inveterately compelling about watching people with all the talent in the world destroy themselves more or less the exact same way as countless generations of self-destructive geniuses before them.