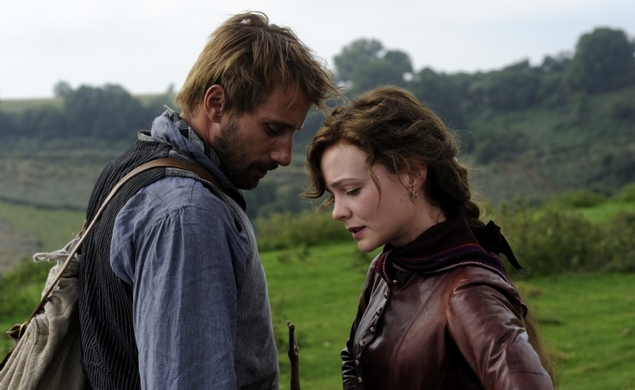 We got our first look at Thomas Vinterberg’s Far From The Madding Crowd back in November, with a dreamy, emotional teaser trailer that played up the drama of Thomas Hardy’s classic novel without really giving us too much in the way of rich characters. And that’s a shame, because Hardy’s fourth book is populated by extremely complicated people, particularly the forward-leaning and independent-minded Bathsheba Everdene. Carey Mulligan is playing the headstrong Bathsheba in Vinterberg’s new film, and from the looks of a new full-length trailer, her promise to astonish her employees just might carry over to her audience.

Bathsheba is the kind of heroine we don’t often see in period dramas—a shame, really—simply because she’s not entirely taken with the idea of marriage. Although Bathsheba is the lucky heir to a big farming fortune, she’s not afraid to get her hands dirty and do the work necessary to make herself a success. When her close friend and fellow farmer Gabriel Oak (Matthias Schoenaerts) requests her hand in marriage, she refuses, because, no, she really doesn’t want a husband. This isn’t Jane Austen, Bathsheba isn’t playing games, she actually does want to be her own woman, and that does not include having a husband.

Of course, life gets in the way, and she’s eventually charmed (sort of) by two very different men: The rich William Boldwood (Michael Sheen) and the sexy Sergeant Troy (Tom Sturridge). For a woman not beholden to marriage, Bathsheba is definitely interested in romance, even if it backfires in spectacular fashion. Get a little taste of the drama to come with this new trailer:

She does not want a husband! But, maybe, just maybe, she kind of does? I mean, if Matthias Schoenaerts is asking and all...