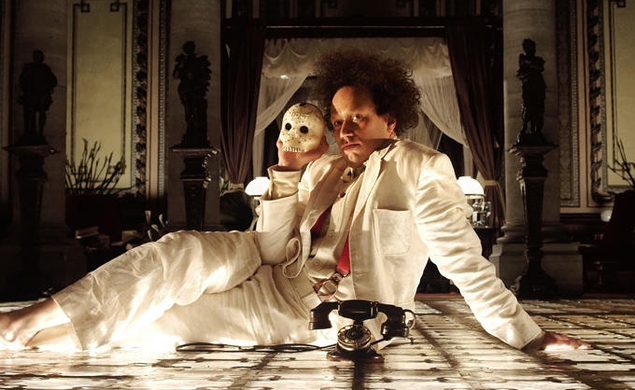 Peter Greenaway’s background as a painter, muralist, and multimedia artist is reflected in the bold colors and striking compositions of the films he makes. Greenaway, perhaps best known as the director of The Cook, The Thief, His Wife And Her Lover, is a supremely visual filmmaker who brings a painter’s eye for striking imagery to his best work.

Now the veteran British filmmaker is bringing his extraordinary eye and overwhelming passion to the story of one of film’s first and most flamboyant visionaries, the Russian director Sergei Eisenstein. Mainstream American audiences might know Eisenstein best as the inspiration for the scene with the baby carriage at Union Station in Brian De Palma’s The Untouchables, but cinephiles revere Eisenstein as one of the greatest and most forward-thinking filmmakers in Russian film history. Eisenstein was particularly admired for his aggressive approach to editing, and his films, like The Battleship Potemkin—which includes the Odessa Steps sequence De Palma was paying homage to in The Untouchables—are still regularly screened for film students for their revolutionary approach to juxtaposing images.

Greenaway’s film, Eisenstein In Guanajuato, captures an unusually dramatic and eventful epoch in Eisenstein’s life, when he left his Russian homeland and spent 10 days in the Mexican city of Guanajuato while attempting to make the film Que Viva Mexico. As previously reported, the film will extensively explore Eisenstein’s experiences with sex and death, two well-worn Greenaway themes, as he hung out at the city’s Museum of the Dead and explored the richness and complexity of life outside of Stalin’s Russia. Today we’re treated to the first glimpse of Greenaway’s take on Eisenstein (played here by Elmer Back), in a new trailer. Take a look:

Greenaway’s films are a bit of an acquired taste, but this looks like an ideal pairing between filmmaker and subject, and should be of particular interest to cinephiles.