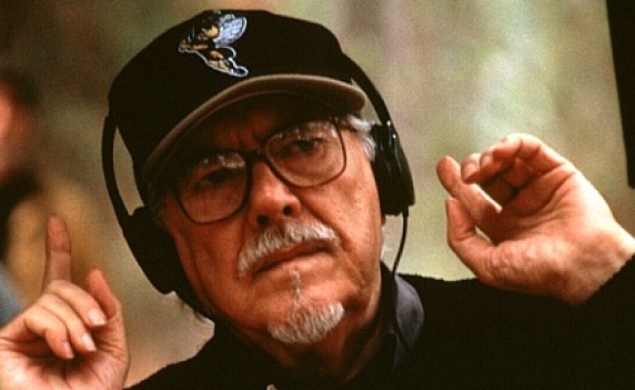 Documentarian Ron Mann does not dramatize his subjects so much as he unambiguously celebrates them. Best known, perhaps, as the director of the 1999 marijuana-criminalization doc Grass (thesis: smoking weed is cool and pigs are the worst), Mann has a flashy, highly distinctive style that highlights campy stock footage, animation, and a fizzy, dizzy approach to American pop-culture history. Previously, Mann has made films about the hysteria over comic books (1988’s Comic Book Confidential, which posited that comic books are cool and the pigs who try to censor them are the worst), the Twist (1992’s Twist, which posited that dance crazes and young people are cool, and people who try to repress them are the worst), hot-rod icon and illustrator Ed “Big Daddy” Roth (the 2006 Ed “Big Daddy” Roth biopic Tales Of The Rat Fink, which controversially proposes that Roth was totally cool), and 2003’s Go Further, which deviated from Mann’s comic-book style in a goofy, stony celebration of Woody Harrelson that set out to illustrate that Harrelson isn’t just a great actor, but also a wise guru with much wisdom to dispense to the young people, primarily about hemp and marijuana, which Mann thinks is totally cool. Go Further actually made me hate Harrelson, an actor I like and whose views I support, but who comes off in the film as an obnoxious, self-righteous blowhard.

Now Mann has turned his uncritical eye to a subject both worthy of his effusive adoration and ill-served by it: Robert Altman. I began this column to educate myself on the world, but there was nothing in Altman that I didn’t already know about the man, either from being a student of film, various commentaries, and Mitchell Zuckoff’s 2009 book Robert Altman: The Oral Biography.

Zuckoff’s book was admiring on the whole, but depicted an artist who wrestled with demons, was often a bad husband and a bad father, was an angry, moody drunk who picked fights with the right people as well as the wrong ones, and took chances for the sake of his art—but also because he was reckless, irresponsible, and a bit of a bully. That is not the Altman of Mann’s film, who is equal parts great American truth-teller and twinkly-eyed, Santa-esque teddy bear. Much of the film is narrated by the filmmaker’s third and final wife; one way to get around Altman’s troubled first two marriages is to ignore them altogether, as Mann does here. No point wasting precious screen time on marriages that didn’t succeed, or that might have painted him in a much darker light. Similarly, the closest the film comes to acknowledging that Altman—while a beloved patriarch to the crews and especially the casts of his film—wasn’t around much when own children were young is by having one of his sons sheepishly concede that he was more married to his work than devoted to his blood relations. (Although Mann does suggest that Altman more than made up for any shortcomings he may have possessed by being such a wonderful father and husband and human being late in life. )

So while I didn’t learn much from Altman, it’s a sprightly and upbeat cinematic Cliff’s Notes for Altman’s life and career that settles for buffing up the legend, and diligently working through the broad strokes and greatest hits. It’s neat seeing footage from the television shows Altman worked on early in his career, particularly a show called Whirlybirds, where he met his final wife. And as a Billy Jack obsessive, it was neat seeing Tom Laughlin (a.k.a. Billy Jack) in a brief clip from 1957’s The Delinquents.

Altman begins with my, and every lazy schoolboy’s favorite technique: a definition. In this case, it’s the definition for Altmanesque, and Mann returns repeatedly to that word to ask a series of big-name Altman alumni how they would define the term, including Lily Tomlin, Robin Williams, and Bruce Willis. Every respondent radiates appreciation as they offer anywhere from one word to a paragraph of rapturous praise for Altman and his genius. Watching the film, it’s easy to get the sense that Mann didn’t ask any follow-up questions, that he was content to have Williams’ eyes go all gooey and child-like as he praises his Popeye director as creativity personified, rather than asking about the famously troubled, nightmarish making of Popeye, which I suspect would have produced a substantially more compelling answer.

Altman gushes about Altman’s creative and commercial triumph with M*A*S*H, his innovations with overlapping dialogue and experimental naturalism, and his 1970s heyday as one of the Princes of New Hollywood. It then follows a predictable arc, focusing on Altman’s career as it hits a bleak commercial nadir in the late 1970s, followed by experiments with both directing theater and fusing theater and film, and then on his various late-period renaissances/comebacks, first with 1992’s The Player and then with 2001’s Gosford Park.

Mann’s one-dimensional tribute to a man whose art embraces and embodied the complexities of mankind is ideal for young movie lovers who’ve maybe seen M*A*S*H or The Long Goodbye in film class and are fascinated by the man who made such groundbreaking classics. I was moved in parts by the film, and entertained by others (like a priceless anecdote where Altman tells Dick Cavett about inexplicably receiving a book in the mail from Richard Nixon, thanking him for his continued support). But ultimately, it’s the sort of facile, superficial movie that Altman never would have made himself, and probably wouldn’t have enjoyed, despite its reverential treatment of him.