Our next Movie Of The Week: The Muppet Movie 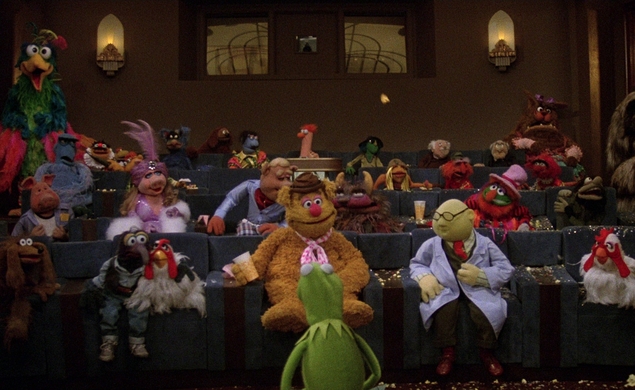 Even though Jim Henson’s core Muppet gang—Kermit, Miss Piggy, Fozzie, Gonzo, and the rest—got their start on television via the 1970s variety program The Muppet Show, they’ve become more associated with film over the years, thanks to a string of theatrical films of varying, but overall pretty good, quality in the ’80s and ’90s, and a successful modern reboot beginning with 2011’s The Muppets. That impressive run began with a film that proved Henson’s felty creations could withstand the translation to the big screen on both a practical and narrative level: 1979’s The Muppet Movie.

The solution to the latter obstacle was brilliantly simple: Make The Muppet Movie the moviest movie that ever movied, one based in a classic, time-tested premise—the road picture meets the quest-for-fame narrative—and livened up with lots of meta and biz-centric humor, Oscar-nominated songs by Paul Williams and Kenny Ascher, and a large stable of guest stars from both Old and New Hollywood. Hell, the movie starts with the Muppets coming together in a screening room, buzzing with excitement—well, except Statler and Waldorf, obviously—over seeing their own story on the big screen.

Actually getting that story to the big screen was a much tougher feat, though. Up to this point, The Muppets had existed primarily in studio settings, and the process of bringing them out into vast expanses (and vast Studebakers) of the world required a lot of inventiveness and perseverance on the part of Henson, his Muppeteers, and director James Frawley (who reportedly hated the time- and labor-intensive process of filming Muppets; future Muppet movies were helmed by Henson and his close associates for a long time thereafter). Henson and co. developed a lot of never-before-seen techniques that would allow Kermit The Frog to ride a bicycle, sing while sitting on a log, and dance with Fozzie Bear. It’s movie magic of a very specific sort, and while it never approaches realism—what with the talking felt animals and all—it has its own singular cinematic charm.

Next week for Movie Of The Week we’ll dive into the film that began the Muppets’ big-screen legacy. We’ll kick it off Tuesday with my Keynote essay on how the film distilled and cemented the core values of Henson and his company, and an accompanying Forum discussion between Tasha Robinson and Noel Murray. Then on Thursday, Jason Guerrasio will dive into the many Muppet sequels. We hope you’ll follow your dreams and join us on our journey into The Muppet Movie—and don’t forget to take a left at the fork in the road.