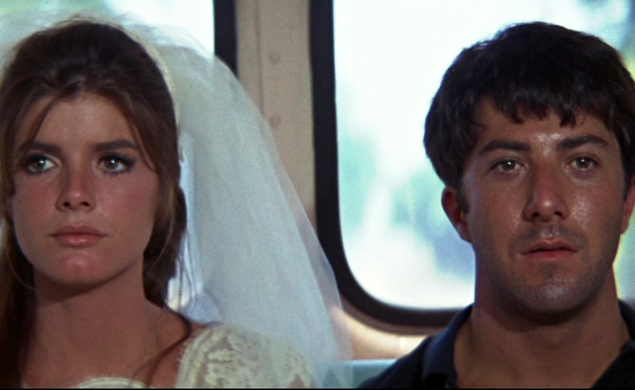 I saw The Graduate for the first time as a teenager, in a film class I took as part of a summer college-prep program. It immediately became one of my favorite movies, in large part because the dreamy Simon & Garfunkel soundtrack and the free-floating dissatisfaction of recent college grad Benjamin Braddock (played by Dustin Hoffman) were both designed to appeal to mopey teens; but also because the course’s instructor did an excellent job of drawing the class’ attention to the movie’s framing, lighting, and editing, and helped me to start appreciating the visual qualities of cinema. (He also showed The Cabinet Of Dr. Caligari and the original Scarface in that class, which helped just as much.) I watched The Graduate so much as a kid that I kind of got sick of it, and when I later started getting into other New Hollywood directors like Robert Altman, Martin Scorsese, and Arthur Penn, I started to find The Graduate too controlled and arid. After giving it a rest for a decade or so though, the film started to open up again. It’s not just historically significant—as one of the first studio films to tap into the burgeoning youth market in a major way—it’s an astute and impeccably acted piece of social satire, where Benjamin’s scandalous affair with an older neighbor (Anne Bancroft) is symbolic of the choice an entire generation had to make between middle class complacency and something else. Because director Mike Nichols and screenwriters Calder Willingham and Buck Henry choose not to define that something else, The Graduate is even more affecting to me now than it was when I was a kid. Even now, Benjamin’s alienation is just so hard to shake off. The Graduate airs on SundanceTV at 10 p.m. Eastern.