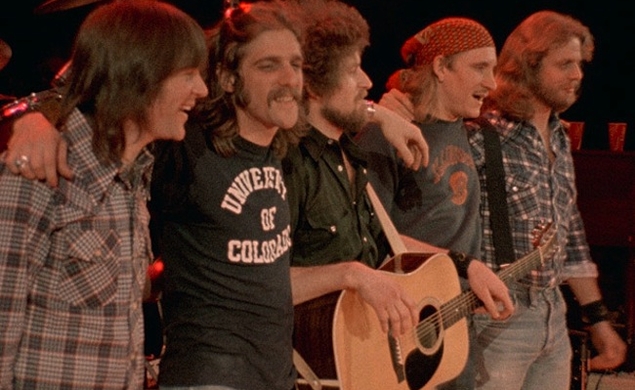 As readers of this column can attest, I am unhealthily obsessed with pop-music lore, whether it takes the form of quickie tell-all memoirs or music documentaries. I’m even fascinated by the histories of bands I dislike, or even hate. I read Motley Crue’s group autobiography The Dirt, three of the four memoirs by the various members of KISS, and and a biography of the Eagles (Marc Eliot’s To The Limit, whose publication Don Henley tried to stop), more out of schadenfreude than out of any genuine affection. I wanted to see just how obnoxious one group of rock stars could be, and glory in their downfalls.

But even for me, watching a 188-minute documentary about the Eagles is an awful big commitment to something I don’t like. For starters, 188 minutes is a very long time to do anything other than make sweet love to your old lady, and I already knew more about the Eagles than most of the bands I genuinely love.

Yet I found myself watching the 188-minute documentary History Of The Eagles all the same, hoping that the delicious luridness and unrepentant sleaze of To The Limit would make it to the screen. The key difference, though, is that Limit is wildly unauthorized, while History gives co-group-leaders Don Henley and Glenn Frey’s self-serving, fully authorized account of their life and times. I was disappointed, in part because this is clearly a version of history written by the winners. In this case, that’s Frey and Henley, who are more interested in legacy preservation and bolstering their images than in unvarnished, entertaining truth.

Because it’s authorized, The History of the Eagles, produced by the ubiquitous Alex Gibney, minimizes The Eagles’ debauchery, drug abuse, and rampant womanizing, and focuses instead on the group as a singularly gifted collection of songwriters and tight harmonizers whose words and melodies are deeply embedded in American culture. For instance, cocaine plays a huge role in To The Limit; it pretty much posited The Eagles as a collection of cocaine addicts who sometimes performed music rather than the other way around. Yet the closest the documentary comes to acknowledging that The Eagles pretty much single-handedly financed every Columbian drug lord in the 1970s is around the 100-minute mark, when someone concedes that, during the aptly named The Long Run sessions, everyone was pretty into cocaine.

The story of the Eagles in the 1970s abruptly ends about 20 minutes later, and when we pick up The Eagles’ story in part two, the film focuses on their 1994 comeback: They got back together once they realized they could receive all of the money in the world if they put aside their hatred of each other and trotted out the old hits. In this eminently skippable second half (which only takes up one of the film’s three hours), only Joe Walsh needs to dry out for the group to be as good as it ever was, if not better (according to the film, at least).  There’s at least one exciting fission of tension: Guitarist Don Felder objects to Frey and Henley getting more money than everyone else (to the tune of three times more than Felder for a retrospective box set), both because they wrote most of the hits and—as they so charmingly note—were the only band members who had solo success between 1980 and the 1994 reunion. Felder asks for more money, and Henley counter-proposes that Felder no longer be in the band, so Felder’s out, and the money train keeps rolling smoothly.

The documentary posits the Eagles, at their creative peak, as a band that divided audiences. To the country establishment, they were a bunch of coke-snorting L.A. assholes. They kept trying to go into a harder-rocking direction with producer Glyn Johns, who told them that he had worked with The Rolling Stones and The Who and they certainly were not in their league, so they should shut up and play their silly cowboy songs. (In a related development, the group and Johns soon parted ways.) To that end, they hired guitarist and singer Joe Walsh, who wasn’t just a rocker—he was a Muppet-like caricature of an out-of-control rock ’n’ roll badass.

As it turns out, country didn’t accept the Eagles, nor did the rock establishment. Just about the only audience that embraced the band was the one that made its greatest-hits album one of the top-selling albums of the 20th century. With that kind of popularity comes an awful lot of hubris, and it’s always interesting seeing how crazy rock-star ego manifests itself. In the case of previous Streaming University subject Ginger Baker, it took the form of a split with musical soulmate Fela Kuti, after Baker played polo with the African elite over Kuti’s fierce objections. In the case of the Eagles, that crazy, out-of-control ego peaked with one of the lesser members of the Eagles disrespecting Skeletor-looking California Senator Alan Cranston after a fundraiser, and Frey, apparently something of a Cranston super-fan, exploding with rage at his bandmate’s rudeness.

Though this is an authorized look at the Eagles, the band—particularly smug and self-righteous Henley and the aggressive and arrogant Frey—come off like assholes all the same. Even when they’re in control of the narrative, as they definitely are here, Henley and Frey still manage to come off as dicks sniping bitchily at the complaints of ex-members jealous of their power and fortune. The remaining Eagles (Frey, Henley, Walsh, and Timothy B. Schmidt) attained a level of fame, fortune, and power wildly disproportionate to their modest talents as musicians and songwriters—and I write that as someone who enjoys some of their songs, but finds the grand gestalt of the Eagles, as encapsulated by this documentary, vaguely nauseating.