Our next Movie Of The Week: Fritz Lang’s M 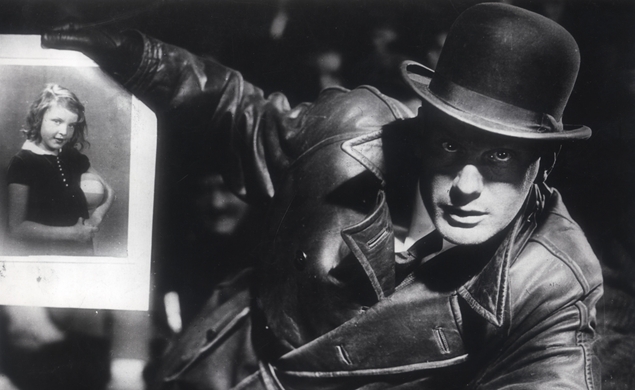 See the glower on that man in the photo? That is the glower of a man who is not remotely pleased about the fact that a serial killer is murdering children in Berlin. Not because he loves kids or is sentimental about the value of human life, but because he’s a professional safecracker (in fact, his character’s only name is Safecracker) who’s finding it hard to do his job because the police are all riled up over the serial killer.

That's the world of Fritz Lang’s 1931 M, a black-and-white German classic largely regarded as one of the key precursors to film noir. Peter Lorre stars in his breakthrough role as the killer, a haunted man who claims he’s driven to kill, though the mania he describes as driving him is hard to reconcile with his placid behavior as he lures little girls away with candy, toys, and friendly chatter. His murders terrorize the city, but also infuriate the underworld, and as the police crack down on the usual suspects in hopes of running across their prey, the usual suspects take matters into their own hands. Lang brings in some thoughts on police procedurals, moral relativism, mob mentalities, and the urge to commit crimes, but mostly, he delivers a tense and breathless thriller, experimenting with light and sound in daring ways.

Next week’s Movie Of The Week discussion (which won’t start until Wednesday because of some special content coming your way Monday and Tuesday) will look at both Lang’s original and Joseph Losey’s 1951 remake, and get into the ways Lang plays with his new technology. We’ll also spend the week walking around eerily whistling Grieg’s “In The Hall Of The Mountain King,” just to unnerve other people familiar with the film. Join us for the discussion… and the whistling.

A note on versions: Criterion has a spiffy Blu-ray restoration of the film, and that’s the version streaming on Hulu Plus. It’s also free on YouTube in at least one version, if you can deal with the watermark. But watch out for shortened versions—Criterion’s attempt at a complete reassembly of the notoriously re-edited film runs 110 minutes, but past DVD releases include a 99-minute version and a 72-minute cut. And watch out for versions with non-German soundtracks—some are just dubs, but the French version floating around includes large sections that were reshot in the 1930s (with Lorre reprising his role in French, and faster editing). And needless to say, many of the transfers out there, especially on YouTube, are abysmally fuzzy. If you’re watching a version that isn’t as sharp as the header image on this Newsreel, you’re missing out on half of what makes Lang’s work striking and special.