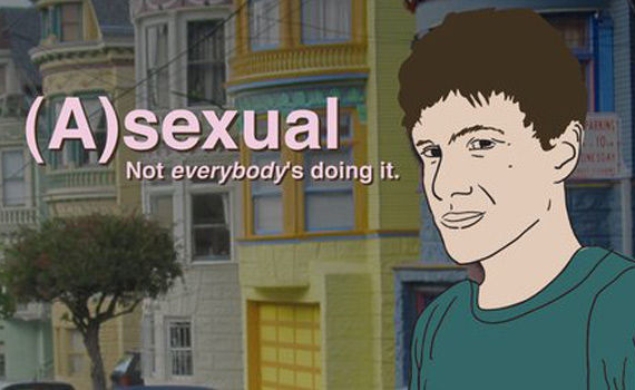 I have been hearing a lot about asexuality as of late, most notably on one of my favorite podcasts, The Mental Illness Happy Hour. I have to admit that, initially, I found the concept fairly confusing, if not self-contradictory. Sexuality, after all, is traditionally about having sex, about desire, about that irresistible urge to explore it however you see fit. In that respect, asexuality is the antithesis of those impulses: It’s about not being sexually attracted to men or women, not having any sexual desire at all, lacking even the faintest urge to explore your sexuality because it just doesn’t interest you.

Watching (A)sexual, a documentary about the nascent but growing asexuality movement, for Streaming University, I realized that there’s an unconscious element of narcissism and egocentrism in thinking that sexuality is such an endemic part of being a human being that to say no to sex, in all its forms, is to deny an essential part of your humanity. As a heterosexual, I have a hard time wrapping my mind around the concept that there are people—and (A)sexual posits the asexual community represents 1 percent of the population, or some 3 million people in the U.S alone—who simply don’t want to have sex.

I’m certainly not alone in that thinking. Throughout (A)sexual, asexual activists endure skeptical looks and questions (even at gay-pride marches) about whether they’re really just gay but celibate, afraid of sex, or just haven’t explored enough yet, or at all. In one of the film’s funniest and most revealing moments, pompous boob and bowtie aficionado Tucker Carlson asks one of the film’s strongest personalities if, for him, sex is like goat cheese—if, in other words, while it might seem weird and wrong and foul-tasting to eat goat cheese the first time, after five or six goat-cheese experiences, they’ll find themselves loving the taste of goat cheese, and come out as a proud goat-cheese lover. But (A)sexual makes a convincing case that asexuality really does exist and deserves a place on the spectrum of human sexuality.

This raises the question of why asexual activism has to exist at all. Why broadcast to the general public your complete disinterest in having sex with men or women when there are no bigots trying to legislate your sexuality, or tell you who you can or cannot marry, or deny you a job or a loan on the basis that, at the end of the day, you come home to an empty bed and don’t even masturbate? The documentary convincingly answers that question as well, by arguing that asexuality doesn’t really exist in our culture or our pop culture. It’s not like television and film are filled with characters who feel a strong desire not to have sex. If there are asexual characters in pop culture, that asexuality certainly isn’t overt.

So people who grow up not being attracted to men or women are likely to feel very alone in their lack of desire, to feel that there’s something desperately wrong with them if they don’t subscribe either queer or straight notions of sexuality. Consequently, it can be incredibly empowering to come across an entire community of people who lead rich, full lives (and studies show that asexual people have no greater incidences of mental illness or unhappiness than the boldly sexual, though one of the people interviewed does suggest a connection between asexuality and Asperger’s) while experiencing no sexual desire. For that reason alone, it’s worth asexual advocates risking shame and puzzlement to march proudly for their cause.

But a lack of sexual desire does not necessarily lead to a lack of desire for romantic relationships, or for the kind of emotional intimacy that ideally comes with sex. In fact, asexuality can complicate relationships tremendously, since it tends to challenge conventional notions of monogamy and both queer and heteronormative ideas of ideal relationships. By the end of (A)sexual, one of the asexual couples is getting married, and a strong, popular voice in the movement is coming to terms with the realization that he feels a need to have sex, in part because the culture at large doesn’t really recognize or value relationships unless sex or marriage is involved.

(A)sexual could be longer and more substantive. But at a briskly paced 75 minutes, it offers an irreverent yet deeply felt primer on a fascinating and under-explored corner of human behavior and human sexuality. And if I were a young asexual person coming of age in a hyper-sexualized culture that angrily insists that, whether you’re gay, straight, or transsexual, you damn well should be trying to fuck someone, I can only imagine how liberating and empowering it would be to discover that there are a whole lot of people who feel the same way you do—and that they don’t conform to any one stereotype about how the asexual are supposed to look, think, or behave.