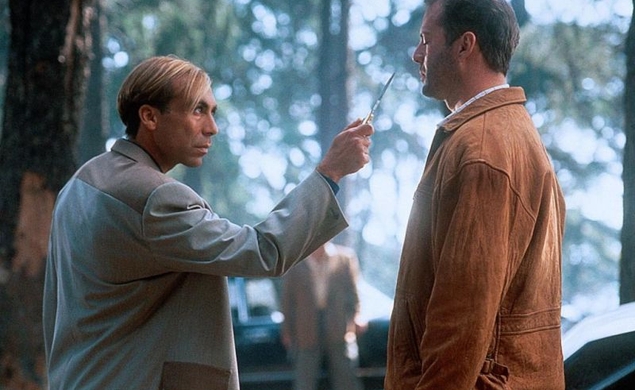 Scenes From The Departed is an occasional feature that revisits a film from the career of the recently deceased to explore what it says about the artist’s life and work.

A talented and well-liked stand-up comedian who also dabbled in playwriting, painting, and essay-writing, and who died this past Saturday of liver cancer at the age of 57, Taylor Negron was far too quirky and offbeat to qualify for conventional leading-man roles. Negron trafficked in ambiguity of the ethnic, racial, and sexual variety. He was gay at a time when openly gay performers were much rarer, especially in stand-up comedy, and of Jewish, Iranian, Italian, and Puerto Rican descent, which helped explain his unique and offbeat appearance.

He broke into stand-up at the legendary Comedy Store while still a teenager, appeared on The Dating Game repeatedly, and worked as Lee Strasberg’s assistant at The Actor’s Studio before pursuing stand-up and acting full-time. Hollywood didn’t know what to do with a figure so singularly offbeat, so it largely relegated him to bit, supporting, and villainous roles.

He was a working actor, so his resumé was filled with the regrettable likes of Scream Of The Bikini, Super Capers: The Origins Of Ed And The Missing Bullion, and Surf School. But in 1991, his air of vaguely European menace and sexual androgyny made him perfect for the secondary villain role of Milo in the blockbuster The Last Boy Scout, where he is billed fifth, before even Halle Berry (though her character is murdered early on).

Negron’s Milo makes an indelible impression before his first on-screen appearance. It’s his sonorous yet sinister voice, soft but persistent, heard over the phone telling troubled football player Billy Cole (future Tae-Bo workout maven Billy Blanks) to score and win at any cost. Milo is consequently the catalyst for the film’s most remarkable setpiece, when Cole takes his advice way too literally and, high on PCP, pulls out a gun and shoots the opposing team when they try to tackle him before ultimately turning the gun on himself.

Milo doesn’t appear onscreen for another hour, but at that point, his presence dominates the film. He’s a henchman who prides himself both on his high-end clothing and on his good manners; he makes a point of calling Bruce Willis’ scuzzy secret-service man Joe “Joseph.” He’s also a wiz at delivering Shane Black’s hard-boiled dialogue with tossed-off nonchalance. For example, when a cop pulls him over and asks if there’s a problem, Milo matter-of-factly deadpans, “Yes. There is a problem. Apparently there are too many bullets in this gun,” before eliminating that problem by depositing those bullets into the cop’s body.

It’s obvious the filmmakers loved what Negron brought to the role, because he’s at the center of seemingly all of the third-act action. After his car plummets off a cliff, Joe makes a special point of firing bullet after bullet into the car to ensure that Milo is finally dead, but a scene or two later, Milo has roared back to life and is preparing for his ultimate duty of killing Senator Calvin Baynard (Chelcie Ross) from a sniper’s nest high in the lights of the football field where a game is being played.

This leads to the film’s second most impressive, and most impressively ridiculous, setpiece: Jimmy Dix (Damon Wayans), a disgraced football player out to clear his name, mounts a horse and, with pinpoint accuracy, hurls a football that stops Milo’s bullets from reaching their intended target. But the film isn’t quite through with Milo yet. No, a bad guy this formidable deserves a public and exceedingly gruesome death, so after Joe (or Joseph, as he is more formally known), pumps even more bullets into Milo, Milo then plummets to his doom, only to be intercepted by the whirring blades of a helicopter that chop and dice his body like a giant hunk of meat inside a blender.

Yet I suspect that if The Last Boy Scout were to have a sequel, they would have somehow found a way to bring Negron back, either by having him play his identical twin brother or folding him into some flashbacks. Truth be told, Negron deserved a richer and more dimensional cinematic showcase, but he took a henchman role here and made it something memorable and distinctive. He was one of those guys who enlivened every part he played, no matter how small or secondary, and it’s a shame he didn’t have more of an opportunity to showcase the full extent of his off-kilter talent in lead roles—or at least supporting parts that didn’t focus largely, if not exclusively, on his sexual and racial ambiguity and quiet air of silky menace.