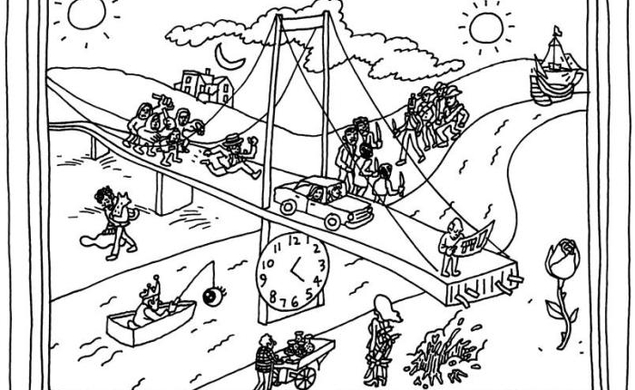 The Criterion Collection takes apparent pleasure in teasing its dedicated customer base with hand-drawn hints as to what the boutique distribution company is releasing during any given year, thanks to the annual “Wacky New Years Drawing,” a multi-layered affair rife with hints about new Blu-rays and DVDs to come. But Criterion never messes around with an announcement day. Announcement day is sacred. Announcement day is the 15th of each month. Announcement day happens even if the cinematic news cycle is dominated by other things, like Tax Day (well, in America) or Oscar nominations (as happened yesterday).

Although Criterion’s April release schedule might have gotten just a teensy bit lost in the shuffle of yesterday’s Oscar nomination announcements, we can now turn our attention to the latest batch of new releases set to hit shelves (Internet-y and otherwise) in April of this year. That’s a good thing, because this is an exceedingly fine batch of titles.

Although Criterion will start its April on the late side, not releasing anything until April 14 (sorry, April 1 and April 7), the month’s collection will open with two excellent titles of note. The Criterion release of Sullivan’s Travels will mark the first time the feature will be available on Blu-ray in the U.S., and Odd Man Out is brand-new to the collection, although it has previously been available on Blu-ray and DVD elsewhere. Later in the month, Jean Renoir will get his second entry into the collection in just three months, with the release of The River. The month will wrap up with a new HD digital restoration of Jean-Pierre Melville’s Le Silence De La Mer, along with a freshened up The Friends Of Eddie Coyle (previously available only on DVD).

All titles will be available on DVD and Blu-ray and will retail at $29.95 and $39.95, respectively. They are available for pre-order at the Criterion site, where you can snag them for 20 percent off right now.

Additionally, Criterion will release a new Eclipse box set—the first since last December—that features three silent films from Yasuojiro Ozu. The Eclipse Series 42 will be available only on DVD, and will retail at $44.95, with a 20 percent pre-order pushing it down to the very affordable $35.96.

And, speaking of that “Wacky” annual drawing, the 2015 version is pictured up top. Start your spectulation…now.