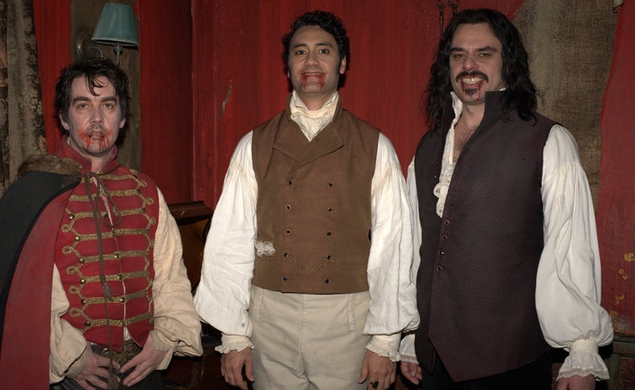 Recently we wrote about David Cross’ innovative and risky plan to self-distribute his directorial debut Hits! by funding it through Kickstarter and releasing it via an unprecedented and radical pay-what-you-want model. Cross sought to raise $100,000 for the distribution, promotion, and publicity costs of his film, and as of this writing, has grossed close to $60,000 with 19 days left to go.

Now, another cult comedian and veteran of a much-missed HBO comedy is going to Kickstarter to try to raise funds to self-distribute his co-directorial debut. Yes, Jemaine Clement, one-half of beloved New Zealand comedy-folk duo Flight Of The Conchords, is looking to raise four times as much money as Cross for the promotion, publicity, and release of What We Do In The Shadows, the hilarious vampire mockumentary he directed with co-star and frequent collaborator Taika Waititi about a motley crew of ancient blood-suckers preparing for a big masquerade ball.

I saw What We Do In The Shadows and was a big fan, writing, “What We Do In The Shadows generates consistent chuckles and some massive belly laughs out of the surreal incongruity of centuries-old vampires dealing with the mundanities of everyday life… The sight of ancient, dandified vampires riding a public bus or dancing in a rinky-dink New Zealand nightclub is funny enough, but the filmmakers show a real genius for contorting and spoofing the conventions of the horror genre in fresh, inventive ways.” It’s one of the flat-out funniest comedies in recent years, even if it’s more than a little shapeless and rambling, with the beats of sketch comedy rather than film. But I highly recommend it all the same.

Clement plans to release the film in L.A and New York, but wants to raise money for a big, nationwide release. As usual, there will be rewards aplenty, including the opportunity to own the jean jacket Clement wore on Flight Of The Conchords, the opportunity to be extras in Clement and Waititi’s next project, and the requisite meet-and-greets and autographed posters and scripts, as well as more unusual items like bibs and onesies for babies.

The charming gents are seeking to raise an awful lot of money (not Veronica Mars-level vast, but much more than is usually sought on Kickstarter) and the project will only be funded if they reach their $400,000 goal by Feb. 12, so if you are a Flight Of The Conchords super-fan looking to get close to your idol, this is your big opportunity to help distribute a very funny film that very much needs your financial help.