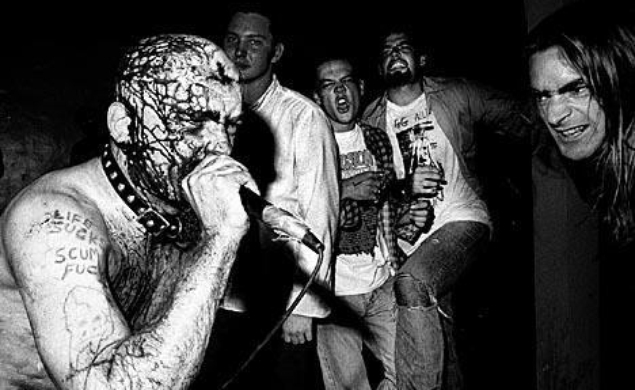 To much of the population, GG Allin was less a rock star, or a musician, or a person, and more of an impossible, ultimately untenable idea: the most deranged, violent, self-destructive punk imaginable, a man whose entire career represented one long piss in the face of propriety and social niceties. That’s a simultaneously intriguing and repulsive conceit, and I have become borderline-obsessed with Allin despite not knowing anything about his music, or owning any of his albums. Hell, I cannot name a single GG Allin song. Most of my exposure to Allin comes from Tom Scharpling’s The Best Show, where Allin and his Hitler-mustache-sporting brother Merle have been intricately woven into the fabric of the show’s fictional Newbridge universe.

So I decided to educate myself on this least diplomatic of songbirds by watching the infamous 1993 documentary Hated: GG Allin & The Murder Junkies, an unlikely directorial effort by Todd Phillips, who would soon become a huge Hollywood force due to his more mainstream-family opuses like Old School, Due Date, and The Hangover trilogy.

Hated didn’t really teach me anything I didn’t already know, though it did fill in some of the blanks in delightfully disgusting ways. Late in the film, for example, a hardcore fan of Allin (he didn’t really seem to have casual fans) regales Phillips with the story of how he invited Allin over for a birthday party, only Allin wouldn’t go unless he was promised a woman would defecate in his mouth. (Gordon Lightfoot was notorious for requesting the same service in his rider.) Sure enough, he found a woman who would do it, and Allin didn’t even have to pay for the honor. Double score!

According to Hated, Allin didn’t drink or use drugs as a teen until his brother Merle (you know, the guy with the Hitler mustache) slipped him some LSD and GG instantly morphed into the lunatic we now know him as, stripping naked, running around, and generally being a whirling dervish of anarchic violence.

With a lot of punk or heavy metal or Insane Clown Posse concerts, a certain threat of violence hangs heavy in the air. There is the threat that something might happen. Allin took that element of doubt out of the equation: At a GG Allin show, something disturbing definitely would happen. Allin would get naked and cut himself with a broken beer bottle, or he’d shit on the stage and then eat it or, or he’d shove a banana up his ass (as he does at a show at a New York college Phillips and his crew filmed). If he wanted to express his raging hatred outward, he might get into a fistfight with an audience member of the entire audience. The music became incidental: It was all about the performance, the more extreme and disturbing the better. The problem was that Allin had to keep upping the ante or his fans would get bored. You can only see a naked man carve erratic patterns on his torso while defecating publicly so many times before it begins to lose its novelty.

To that end, Allin’s career, which resembled violent, anti-social performance art more than it resembled a traditional career in the pop music field, was supposed to climax with the ultimate act of punk-rock self-negation: He promised the world that he would kill himself onstage during a Halloween show. This placed his fans in the peculiar place of rooting for their hero to off himself and denying them all that wonderful, wonderful music and irrepressible antics in the process. If violence and provocation were Allin’s true art forms, then an onstage suicide would be his unmistakable masterpiece, a debacle he quite literally could never have returned from. It would be the ultimate show-stopper, in that it would end not just the show but the performer’s entire misbegotten existence.

In that respect, Allin’s death was the ultimate anti-climax: He didn’t die onstage in a blaze of glory. Rather, he died a much more predictable death of a heroin overdose after the show. Hated is a scuzzy, bare-bones documentary that doesn’t even approach the hour-long range. It is largely devoid of insight into its subject’s psyche, because Allin seemed to be the same cartoon nihilist offstage that he was on—or, rather, he was “on” all the time to such an extent that audiences hoping for the film to explore a side of Allin that wasn’t all about feces, nudity, guzzling piss, and generally behaving like the world’s biggest, most disturbed baby will be sorely disappointed. Some contain multitudes: Allin just had his one extreme shtick and he rode it all the way to the grave.

Hated features Allin on Geraldo, and there’s a sense that both guest and host are playing a role they long ago grew sick of, though heaven knows if Allin didn’t exist, Geraldo or Tom Scharpling would have had to invent him. I wished Hated had plunged a little further into Allin’s life. It captures the freak show adequately enough, but never scratches the surface of the man behind the foul-smelling myth.