Running From Crazy plunges into the infinite sadness of the Hemingways 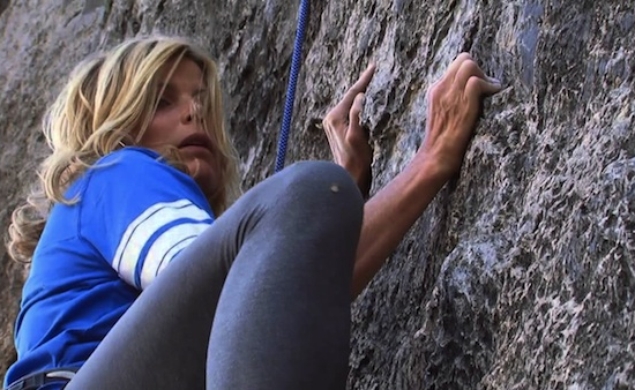 There are some dynasties that seem to pass along an inclination toward suicide like a family curse. There’s no such thing as a suicide gene, but the conditions that can lead multiple generations of a family to attempt or commit suicide are often hereditary: alcoholism, depression, mood disorders, and other diseases.

If a suicide gene did exist, the family of Ernest Hemingway could be said to have an unusually powerful and pure strain. As Mariel Hemingway recounts in Barbara Kopple’s documentary Running From Crazy, seven of her family members have committed suicide, most notably her grandfather Ernest and her sister Margaux, who killed herself 35 years to the day after her famous grandfather ended his own life.

Though they were both beautiful actresses, Mariel and Margaux pursued antithetical paths as adults. Margaux embraced the Hemingway mystique of hard-living adventure with reckless abandon. Part of Running From Crazy consists of previously unseen footage of Margaux visiting sights associated with her grandfather with a haunted, vacant despair that seems to presage her early death.

With a hoarse rasp redolent of whiskey and sadness, Margaux talks of wanting to follow in her grandfather’s footsteps, a goal she accomplished in the most tragic, predictable way possible, retracing her grandfather’s path to alcoholism, crippling depression, and ultimately suicide. One of the film’s unspoken subtexts is that suicide does not define a person; but it’s difficult, if not impossible, to view the extensive, hypnotically sad footage of Margaux outside the prism of her early death. At one of her many emotional nadirs, Margaux talks of being so lonely that at one point she hired a prostitute just to hug her and provide the companionship and comfort that consistently eluded her despite her fame and beauty.

If Margaux embraced the Hemingway mystique to her eternal detriment, Mariel survived, and continues to survive a series of tragedies that would crush the spirit of lesser souls, by striving to lead as un-Hemmingway-like an existence as possible. While Margaux became a hard-living, drug-abusing, alcoholic wild child who was perpetually out of control, Mariel remained sober, abstained from drugs and promiscuity, and was obsessed with being in control to an extent that sapped some of the joy from her existence.

At its weakest, Running From Crazy can feel like an earnest infomercial for clean living, nature, and Mariel’s seemingly endless series of eco-friendly, self-help oriented businesses, from yoga videos to a book titled The WillingWay: Stepping Into The Life You Were Meant To Live, co-written with boyfriend Bobby Williams. Running From Crazy would benefit from less footage of its subject doing yoga in various postcard-ready wilderness tableaus or staring meaningfully into the distance, but it’s understandable why the camera’s gaze fixates on Hemingway, who at 49 looks more beautiful, and more ridiculously fit and healthy, than she was when she played Woody Allen’s teenaged lover in 1979’s Manhattan.

The film’s earnestness is undercut by Mariel’s boldly unsentimental take on her family, a blunt, at times tasteless frankness embodied by the film’s title, which refers to Mariel’s efforts to escape her family’s history of alcoholism, self-destruction, and suicide and find a new, healthier path for herself. She is particularly blunt talking about her deeply troubled relationship with Margaux.

With surprising candor, Mariel talks about feeling deep shame for thinking that her less spiritually inclined sister was stupid, for not loving her enough, of her sister hating and resenting her for a multitude of reasons real and imagined, and never being as close to Margaux as she wanted to be. She’s equally blunt talking about her belief that her father, who withered under the pressure of being Ernest Hemingway’s son, molested her two sisters in an alcoholic haze, or about her frustration with people who leave bottles of Jack Daniels at Ernest’s grave out of a belief they’re paying tribute to his outlaw spirit, and not commemorating the sickness that helped contribute to a wave of suicides and general unhappiness in her family.

Running From Crazy can be honest to the point of cruelty. It’s hard not to wince at footage of a glassy-eyed, vacant Margaux hamming it up for the camera and cooing “yummy” while drinking wine in light of her family history and ultimate demise, or Mariel’s bleak description of her family’s “wine time,” a daily ritual where her parents drank wine to excess that generally ended in fighting and abuse. But the film’s stubborn desire to honor Mariel and her family while refusing to romanticize the Hemingway mystique is a big part of what lends it its sneaky emotional power. I was tearing up by the end.

Mariel sometimes seems too good to be true. Late in the film, there’s a seemingly pointless yet strangely welcome sequence of Mariel getting into a fight and exploding at her equally gorgeous, impossibly healthy boyfriend (who is a dashing stuntman as well as a self-help guru) that seems to exist solely to prove that not even Mariel is serenely composed all the time. Without this strange detour, Mariel would come off as too perfect, an exemplar of resilience and survival, in addition to being preposterously gorgeous and well-preserved.

While Running From Crazy can sometimes seem like an infomercial for its endlessly entrepreneurial subject, it’s ultimately a testament to the life-affirming power of being willing to confront a family history of depression and suicide squarely and soberly, no matter how painful and wrenching that effort might be, rather than trying to escape it via booze or self-delusion, regardless of how comforting that evasion might be in the short term.

Entertainment Value: It seems wrong to assign an entertainment value to a film about suicide and depression, but Running From Crazy was more moving and substantive than I had anticipated.