Our next Movie Of The Week: Michael Mann's Heat 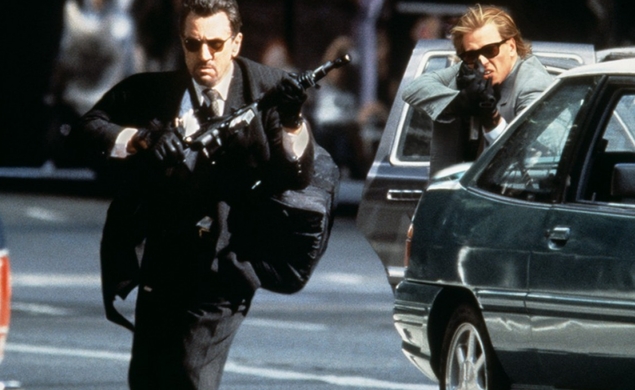 Before Michael Mann’s 1995 crime epic Heat, Al Pacino and Robert De Niro, those two great titans of American acting, had been in only one movie together, The Godfather Part II, but never actually shared the screen. (Save for the beautiful slow dissolves between past and present, for which we obviously have great affection.) Mann brings them together for coffee at about the halfway point in Heat, and it feels like an appropriately historic moment—both an intimate master class from two New Hollywood icons and the union of two consummate professionals, The Cop and The Crook, who know the roles each man has to play. The film is like a brilliant cat-and-mouse game where the cat and the mouse pause to acknowledge that they are, indeed, a cat and a mouse, and then carry on with the chase.

Our next Movie Of The Week, Heat stars De Niro as Neil McCauley, the meticulous leader of a tight crew of professional bank robbers, the core of which includes Val Kilmer, Tom Sizemore, and Danny Trejo. When an unhinged newcomer to the group turns violent during an armored car job, McCauley attracts the attention of robbery/homicide detective Vincent Hanna, played by Pacino, and his team, including Ted Levine, Wes Studi, and Mykelti Williamson. (The cast list is endless: Jon Voight, Ashley Judd, Amy Brenneman, Dennis Haysbert, Diane Verona, William Fichtner, Tom Noonan, a young Natalie Portman, Hank Azaria, Xander Berkeley, Jeremy Piven. Even the likes of Henry Rollins and Tone Loc.) Even as Hanna brings the heat, McCauley and his men prepare for a brazen daylight bank robbery that will score them $12 million and perhaps an early retirement.

On Tuesday of next week, my Keynote will dive into the pleasing symmetry of Heat and the cinematic allure of Michael Mann. Nathan Rabin and Matthew Dessem will continue the discussion in the Forum. And on Thursday, Chris Klimek will explore the roots of Heat. For now, we’ll leave you with the trailer, which wisely plays up the Pacino-De Niro collision:

January 20: Back To The Future
January 27: Rock And Roll High School
February 3: M