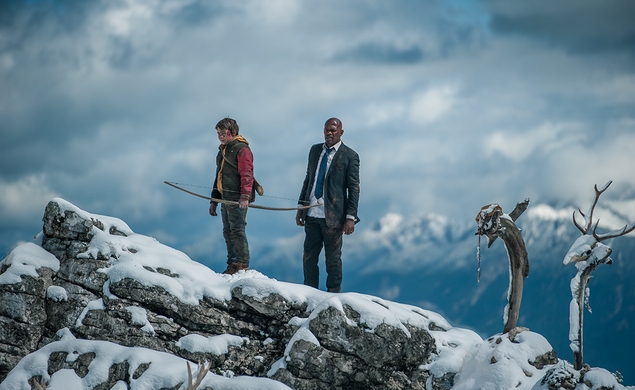 When it comes to willfully bizarre, self-defeating career choices, Samuel L. Jackson is in a league with the likes of John Travolta and Nicolas Cage in that he often seems to pick his roles ironically. The man did, after all, famously star in Snakes On A Plane based solely on its title, and alternates Oscar-worthy performances in movies like Django Unchained with previous You Might Also Like? selection Arena, where he forced people to fight to the death for his deranged amusement while quoting Strother Martin, devouring scenery, and generally channeling his inner Vincent Price.

Jackson’s career is full of both lasting greatness and WTF choices, but the new Finnish intergenerational thriller Big Game represents, Snakes On A Plane aside, one of the most WTF choices in a career full of them. For starters, it’s an intergenerational Finnish thriller that pairs Jackson with child actor Onni Tommila in a premise that suggests the product of a drunken, insane coupling between Air Force One and the old chestnut “The Most Dangerous Game.” And what is the most dangerous game—other than a short story that inspired everything from the 1932 Joel McCrea vehicle of the same name to the 1994 Ice-T showcase Surviving The Game to John Leguizamo’s The Pest—you ask? Why, man, of course!

In the case of Big Game, that most dangerous game takes the form of President Of the United States Samuel L. Jackson (why, oh why, can’t we make that a reality in non-movie world?), who is hunted by evil Finnish baddies and protected by a pre-teen Finnish super-hunter after Air Force One goes down in the Finnish wilderness. The film, which comes out in Finland in March, doesn’t have a Stateside release scheduled yet, but it does have a trailer. Take a look:

The trailer answers the oft-asked question, “When the hell are Samuel L. Jackson and Onni Tommila finally going to star in a movie together?” while raising all sorts of other questions about Jackson’s taste, judgment, and sanity, at least where his career is concerned. Honestly, this has the potential to be hilariously insane, but then, we felt that way about Snakes On A Plane as well. It appears there’s something about movies prominently involving planes that instantly shuts down the perpetually faulty “quality control” part of Samuel L. Jackson’s brain entirely.