Sarah Palin: You Betcha! goes to Alaska, find nothing 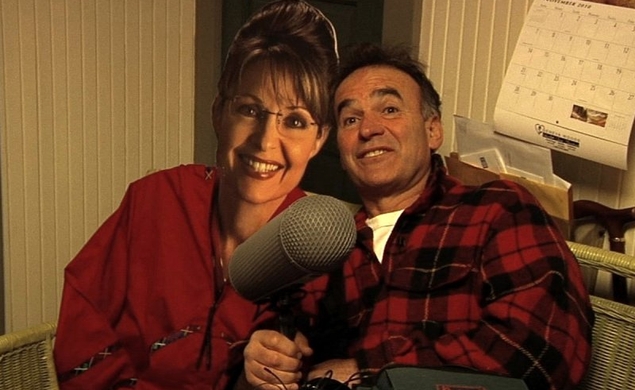 I recently watched and reviewed Tales Of The Grim Sleeper, and was reminded of my measured affection for documentarian Nick Broomfield, whose Columbo-inspired style of filmmaking, as seen in films like Heidi Fleiss: Hollywood Madam and Kurt & Courtney, entails playing the fool to get sleazy subjects to expose the full extent of their greed, duplicity, and all-around creepiness. As a result, I decided to check out one of his other recent features, 2011’s Sarah Palin: You Betcha!, an incompetent hatchet job that finds the documentarian traveling to Palin’s hometown of Wasilla, Alaska, in search of the real story behind one of the most hated, beloved, and controversial politicians in American history. The problem is that the real story of Palin’s spectacular rise and dramatic fall has been told often, and by storytellers and investigators more gifted than Broomfield.

Broomfield is less interested in uncovering new information about Palin’s sins and hypocrisy than in synthesizing all of the dirt that’s already been spilled into one muddy pile of who-the-fuck-cares? Schadenfreude enthusiasts and Palin haters are the only conceivable audience for a film like this—there’s obviously no real question as to whether Broomfield will come down on the pro- or anti-Palin side—yet You Betcha! offers them little but a poorly assembled pastiche of yesterday’s news. Broomfield never gets closer to Palin than making awkward small talk with her at a book signing and otherwise specializes in clumsily articulating the obvious: That behind her aw-shucks, winking, ya-gotta-love-America folksy charm lies a woman who is vindictive toward her enemies, deeply paranoid, obsessed with her image, and, in her garbled syntax and infamous word salads, one of the English language’s worst enemies.

Broomfield pretends to be charmed by Palin’s father Chuck Heath, one of the only people in Palin’s inner circle naive enough to talk to Broomfield, but otherwise is content letting Palin’s political enemies—many of them bloggers, those most respected and vetted of political commentators—trash Palin for her belief in creationism, her myriad political faux pas, and her failings as a mother, politician, and all-around human being. Broomfield has never been big on maintaining dignity, but he is in particularly poor form here: He gets kicked out of Palin’s office after trying to sneak in to discover firsthand whether or not it is decorated like a bordello, lurks around the periphery of events where Palin is speaking, and generally acts like a restraining order in the making, rather than a muckraking journalist.

It would be difficult to imagine a bigger, meatier subject for an attack documentary than Palin, but You Betcha! captures Palin’s strange life at a point where her political currency is at a low ebb, which lends the whole affair an air of pointlessness. Palin did a brilliant job rendering herself a political non-entity through her own political fumbling; she certainly doesn’t need Broomfield’s help making her seem like a less-than-viable candidate for the presidency (or governor, or dog-catcher, or assistant basketball coach).

The dirt Broomfield does manage to dig up barely qualifies as gossip: We learn that Levi Johnston, the father of Palin’s grandchildren, was totally forced to shave for public appearances, which was so not his style and made him feel like a puppet or something. By the time Broomfield is reduced to trying to communicate with Palin from across a huge ballroom through a megaphone (seriously), he comes off less like a dogged investigator than a deranged stalker with an unusually impressive resumé. Sarah Palin: You Betcha! accomplishes the nearly impossible: It almost makes you feel sorry for its subject. It’s an irrelevant look at an irrelevant politician that, despite being three years old, already feels like a period piece. What does it say about the movie that it ultimately reflects more poorly on Broomfield than it does on Palin?