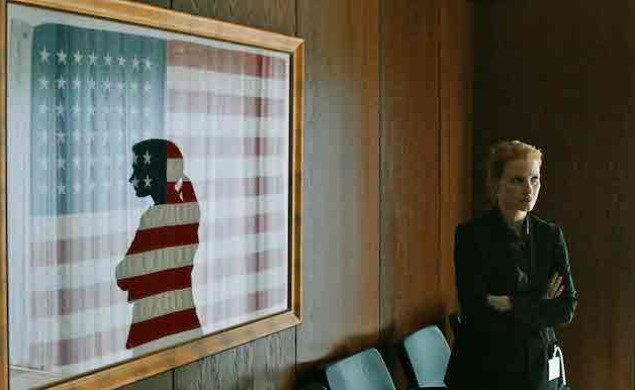 “A schlock franchise like the Human Centipede series may attribute degrading acts to madmen, and Ryan Murphy’s American Horror Story brings a campy sensibility to atrocity. I’m hard-pressed, though, to think of a television show on any network or a movie that would provide a straightforward depiction of rectal feeding and rectal hydration, to which at least five detainees were subjected without the protective filter of genre conventions to distance audiences from what they were seeing. Even Zero Dark Thirty, which had harrowing sequences of torture, including one where a detainee had clearly soiled himself, was not so graphic.”

LA Weekly’s James Rocchi takes us on a tour of the Los Angeles of Inherent Vice:

“The very first shot of Inherent Vice — a pastel sunset over a small slice of West Coast beachside, between two buildings — fixes the film in the real L.A. Set in Pynchon's invented Gordita Beach, the film actually shot Manhattan Beach as Larry's base of operations, even though Ring explains that the small surfside neighborhood was, perhaps, not the best place for a film shoot. ‘Manhattan Beach is not where you bring a film company to do what we did — controlling streets, shutting down traffic,’ he says. ‘It's impossible. There's no parking for film people; in Manhattan Beach, even the residents don't have parking. You can't bring trucks and people and equipment — that, to me, felt like the craziest thing we did. And Paul wanted to be in Manhattan Beach, because that's where Pynchon lived and that's where he wrote the novel.’”

Medium’s Tim Carmody on why Aliens is the best film about technology:

“What saves Ripley from drifting through space forever isn’t the love of the gods: it’s a deep salvage team, who are pissed off that they broke into the ship’s hull for nothing because there’s a live human inside. It doesn’t matter that the tools are dumb. It doesn’t matter that working loading cargo, in the future as it is now, is a shitty job nobody wants. Those oversized pliers and that goddamn welding torch are going to save your life. And it won’t be the last time.”

Esquire’s Nick Schager advises you how to catch up on missed 2014 films:

“2014 delivered a handful of great ’80s throwback thrillers, and the best of them was Adam Wingard’s The Guest, in which a family still grieving over the death of its son (in the line of duty in Afghanistan) is visited by one of the deceased’s military comrades (Dan Stevens), whose shadiness is quickly apparent. From that familiar premise, Wingard elicits consistent, tense action and suspense, all of it set to a menacing synthesizer score that further underlines the film’s John Carpenter-esque lineage.”

Plus, the rest of today’s biz-ness:
-Sean Penn has a gun, man in the first trailer for The Gunman
-These 150 photos from the making of The Phantom Menace will stir up memories (some you may have wanted to forget)
-Ewan McGregor...is...Jesus! (And also the Devil)
-SPECTRE is set to be the most expensive Bond movie ever made
-Oh, look, Hateful Eight has started filming