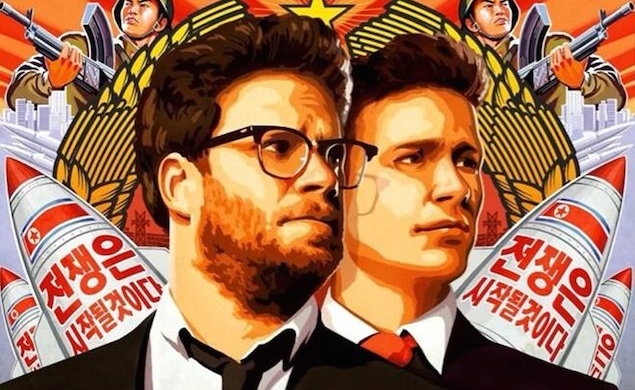 Seth Rogen and James Franco have long been known as wacky funsters, wisenheimers whose shenanigans and japery are always upsetting the powers that be. But what if their latest wacky provocation causes an international incident? That is the fear behind North Korea’s less-than-amused response to The Interview, an already controversial comedy romp about a superficial television interviewer roped into a CIA plot to assassinate Kim Jong-un.

Now a group called the Guardians Of Peace has claimed responsibility for hacking into Sony and releasing five upcoming films and the details of the salaries, social security numbers, and other information of prominent actors and other studio employees. According to The Guardian, earlier this week, a spokesperson for the North Korean government said the attack may have been a “righteous deed of supporters and sympathisers,” despite once again denying direct responsibility. The group then leaked Rogen’s salary for The Interview, because heaven knows there’s nothing more embarrassing than the general public knowing that you make huge amounts of money for your work.

The GOP has now stepped up its game significantly, finally demanding that Sony cancel the entire feature once and for all. The Guardian shares a new post on GitHub, supposedly from the GOP, that demands the studio “stop immediately showing the movie of terrorism which can break the regional peace and cause the War.”

The Interview will open on Christmas Day—that is, if North Korea (or whoever is “actually” “responsible” for the hacking) does not destroy the world with a nuclear attack in retaliation for The Interview some time before that date. As they say in the biz, all publicity is good publicity, even the kind that might blow up the world.