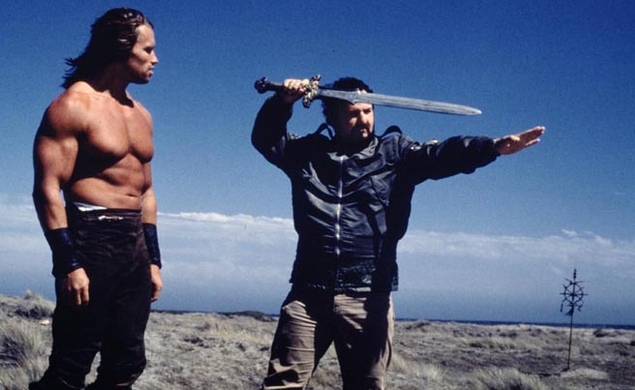 Early in the documentary Milius, mustachioed sentient pile of gravel Sam Elliott tells the filmmakers, “[Milius] doesn’t write for pussies and he doesn’t write for women. He writes for men.” Elliott’s words cut right to the heart of Milius’ tough-guy legend. Conan The Barbarian and Red Dawn director Milius was a man’s man, a “Teddy bear with an AK-47” in the words of one admirer, and the scribe behind some of the movie world’s most repeatable lines, including, “Charlie don’t surf” and “I love the smell of napalm in the morning.”

In a Hollywood that has long swerved left, particularly during the touchy-feely 1970s, Milius defiantly veered right. He was the Attila The Hun of that Hollywood era, a proud throwback to an earlier age when hirsute, barrel-chested men shot guns, conquered lands, and were beholden only to their outsized ambitions and even bigger egos. Milius was, in other words, a character, a larger-than-life figure as big as any in his films.

The adoring documentary Milius makes a case for Milius not just as a one-of-a-kind personality but as one of the most gifted and distinctive cinematic voices of the past 50 years, even if some of his biggest triumphs—like Quint’s big speech in Jaws and Dirty Harry’s “Ya feeling lucky, punk?”—went uncredited. For a man with such a bear-like presence, physically and spiritually, it’s a little ironic how easily Milius slid into the invisible role of the ghostwriter, making other writers look better while obscuring his own gifts.

Milius lovingly chronicles its photogenic and bombastic subject’s rampage through Hollywood in the 1970s as the co-screenwriter and spiritual heart of Apocalypse Now, the writer-director of Dillinger—which is depicted as an enormous critical and commercial triumph, even if it’s half-forgotten now—and the maker of Big Wednesday, his most personal and intimate project, a drama about surfers inspired by his love for the films of Akira Kurosawa.

Milius’ persona as a gun-toting, hippie-antagonizing, macho-man maverick helped make him at least a modest legend in the 1970s. But as the culture changed and Hollywood became less hospitable to renegade voices, he found himself increasingly shunned by the liberal establishment. At least that’s what the film suggests, though Milius collaborators and friends Arnold Schwarzenegger and Clint Eastwood show up to point out that publicly espousing right-wing view points doesn’t necessarily constitute professional suicide.

Milius, which boasts a who’s-who of talking heads including George Lucas, Steven Spielberg, Richard Dreyfuss, and Paul Schrader, is far more compelling when Milius is on top, burnishing his legend with each outsized adventure and wild anecdote. But it becomes much less interesting once his career goes into a deep slump and a man with a reputation as one of the greatest storytellers alive struggles to get films made.

At a certain point, Milius becomes mopey and self-pitying, and though it’s inspirational to watch Milius overcome a debilitating stroke, this documentary ends up being an incongruously soft-hearted, even mushy, and not at all critical exploration of one tough hombre. As a young Milius himself once yelled during a movie screening that displeased him, Milius “doesn’t have enough moxie.” Instead it suffers from an abundance of reverence.

Previous Lessons:
A Brony Tale
Beware Of Mr. Baker
Who Is Harry Nilsson (And Why Is Everybody Talkin’ About Him)?
Please Subscribe
The Source Family
Saturday Night
Is The Man Who Is Tall Happy?
I Think We’re Alone Now