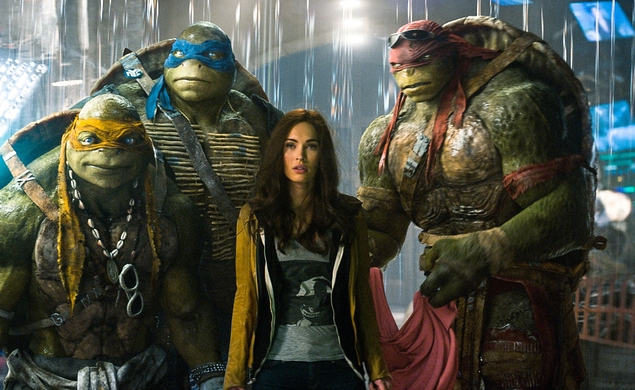 Our cherished critic Nathan Rabin loved, loved, loved the Teenage Mutant Ninja Turtles reboot that crawled into theaters earlier this year. In his review, he used phrases that he reserves specifically for movies he positively adores, phrases like “astonishingly idiotic,” and “dreary boondoggle,” and “can’t even manage to be the right kind of terrible movie.” Imagine his delight, then, when he reads this and finds out that the powers that be over at Paramount have, in their infinite wisdom, seen fit to begin production on a second film about the pizza-gobbling reptilian kung fu monsters. You suckers might be lining up to catch a fleeting glimpse of the newest Star Wars trailer, but Nathan’s already camped out for TMNT2, Megan Fox as April O’Neil poster in hand.

But yes, despite a cavalcade of negative reviews, the Michael Bay-produced film raked in a whopping worldwide gross of $477 million and became Nickelodeon Movies’ most profitable film ever. As such, its fate for a future sequel was practically assured. Today, that sequel has found a director to hopefully guide it out of the sewers and into the light of artistic legitimacy. David Green, director of Essential Viewing-certified films such as George Washington and this year’s stellar, understated Joe will— I’m sorry, my sources indicate that that is not the same person.

The David Green who will helm TMNT2: The Legend Of Curly’s Gold directed this year’s Earth To Echo, which was promisingly un-terrible. In his review, our own Keith Phipps expressed a hope in the director’s future, writing, “This brazen summoning of ghosts of Spielberg movies past might have worked if director Dave Green, making his feature directing debut, had the classic technical chops to pull it off. And maybe he does. That’s a question another movie will have to answer, however.” Maybe that another movie could be this another movie!