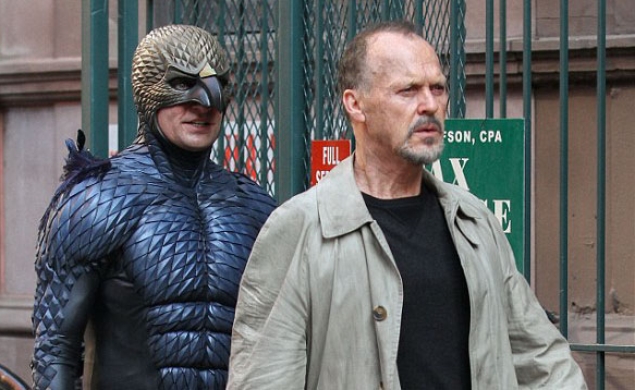 Batman and Batman Returns star Michael Keaton is experiencing a major comeback and generating Oscar talk for his role as Riggan Thomson, the star of a Batman-like superhero franchise called Birdman in the motion picture of the same name. Keaton famously followed up the smash-hit, zeitgeist-capturing 1990 Batman with 1992’s much darker, less rapturously received sequel Batman Returns, a film so morbid that the requisite fast-food tie-in was deemed to be in questionable taste, given the film’s fundamental inappropriateness for children. Then he exited the franchise altogether so the titular role could be played by, in order, Val Kilmer, George Clooney, and most recently, Christian Bale.

Now to help promote Birdman, Fox Searchlight has released a faux-trailer for Birdman Returns, a hit sequel Keaton’s Riggan Thomson starred in before abandoning the blockbuster business altogether and trying to satisfy his wandering muse with a stage adaptation of Raymond Carver.

The fake trailer nails the look and feel of an early-1990s superhero movie, specifically Batman Returns (of course), right down to the Danny Elfman-esque score. It’s also a kick to see trailer-narration clichés like “In a world of darkness, in a time of chaos” lovingly resurrected with Don LaFontaine-like smoothness, even if the trailer tips its hand a little by ostentatiously trumpeting the year the film came out. Sure, that helps contextualize the film and Thomson’s career, and plays up its similarities to Keaton and Batman, but it’s not like the Avengers: Age Of Ultron trailer begins with, “In the year 2015, The Avengers will reassemble.”

Anywho, take a gander at the meta-textual silliness Fox Searchlight has whipped up.

Birdman is currently in theaters.