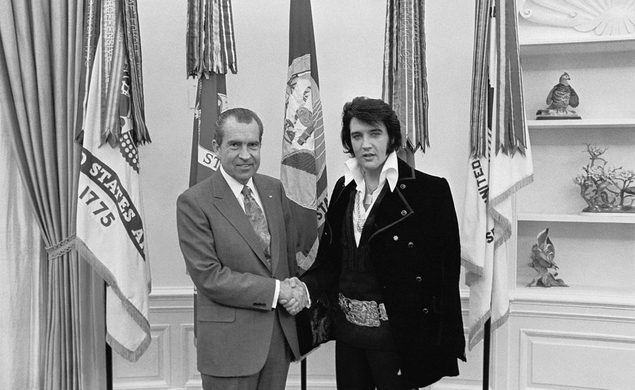 Elvis Presley’s inescapable fame would ultimately undo his fragile psyche, but before it did, it brought the rock icon to the White House. To be filed under “truth, stranger than fiction”: In 1970, a 35-year-old Elvis boarded a plane to D.C. following a spat with his wife Priscilla. It was the first time that he had left his house without accompaniment since age 21, and it only gets more bizarre from there.

He left Washington for California, where he came down with a vicious rash on his face and neck as the result of medication for an eye infection. The King of Rock ’N’ Roll then turned tail back to D.C., encountering California Senator George Murphy on the flight, to whom Elvis expressed his desire to assist the Bureau of Narcotics and Dangerous Drugs. Murphy advised him to send a letter to President Nixon requesting a position in the department, which Elvis did, asking to be made a Federal Agent at Large. Nixon, undeterred by the fact that such a position doesn’t exist, loved the idea and invited the musician to meet in the Oval Office.

Nixon hoped meeting the rock star would chip away at his reputation as the creepy, Lurchian, old-guy president for a generation of young voters. Elvis hoped that he could make a difference in the fight against poorly regulated medical drugs. Their powwow clearly produced the desired effect, as Nixon remains our most cherished public servant and drugs are no longer a concern in America.

Allan Arkush recounted the surreal affair in his 1997 documentary Elvis Meets Nixon, but as Variety reports, a new film will take a fictionalized approach to the Elvis-Nixon summit. Kevin Spacey and Michael Shannon have signed on to portray the president and musician, respectively, in Elvis And Nixon. After a few years of working through developmental snafus (once upon a time, Eric Bana and Danny Huston were slated to star), Loveship Hateship director Liza Johnson will work from a Cary Elwes script. There’s something dementedly inspired about casting Shannon as the notoriously unpredictable rocker: His volatility will lend Elvis the live-wire intensity that consumed him as he aged into irrelevance.

A date of release has not yet been set, but let us all stay hopeful that Michael Shannon’s denim-clad hips will soon swivel into theaters.