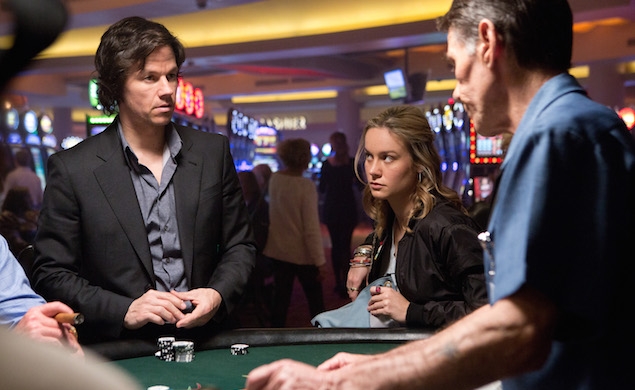 Jim Bennett is a man of layers. He’s a son. He’s a college professor. He’s a connoisseur of sunglasses. He’s a man that doesn’t understand the power dynamics at play when a teacher sleeps with a student. And he’s also, yes, a gambler. Perhaps even The Gambler.

In Rupert Wyatt’s remake of the 1974 James Caan-starring film of the same name, Jim’s got a lot of layers, and they’re all about to be peeled right back, most likely as part of some elaborate torture scheme meant to punish him for his consistently bad financial decisions. Mark Wahlberg stars in the film as Jim, a guy who just can’t stay away from the tables, no matter how poor his betting acumen proves to be. In a twist on the old “one last job” trope, Jim bets it all when he puts his own life up for collateral (bad idea) with a twisted gangster (again, bad idea), and then tries to play both sides by involving the head of a gambling ring (another bad idea).

This would all be bad enough, but Jim has also got big-time lady trouble hanging over his head, in the form of his crazy-like-a-fox mother (Jessica Lange) and a student (Brie Larson) who ends up infiltrating both sides of his life, and also maybe his heart (aww). Will Jim make it out alive? Oh, probably, but he’ll definitely look good while doing it.

The trail of the tape
Title: The Gambler
Director: Rupert Wyatt
Screenwriter: William Monahan
Cast: Mark Wahlberg, Jessica Lange, Brie Larson, John Goodman, Michael K. Williams
Release date: December 19
Tagline: When you get a second chance, the risk is worth taking.
The entire trailer in one line of dialogue: “What if I told you that I'm not a gambler?”
The entire trailer in one screengrab:

Wahlberg reportedly lost more than 60 pounds for the role, and as The Gambler sort of snuck in under the end-of-year release-date wire, we might be looking at a late entry in the Oscar game. Hey, that sure sounds like a gamble, but perhaps that risk will pay off in the form of little gold men.