Tom Hanks to publish book of tales inspired by his typewriter collection (because why not?) 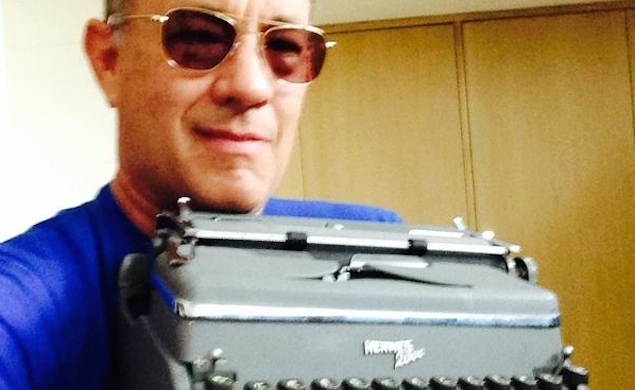 Tom Hanks long ago reached the phase of his career where he could pretty much get away with just about anything, with the notable exception of Larry Crowne. (Man, fuck that movie, I write as someone who has not seen it.) Now the delightful, multi-Academy Award-winning national treasure and the father of noted musician Chester “Chet Haze” Hanks has announced plans to publish a book of stories linked to his collection of typewriters through Alfred A. Knopf.

In a statement, Hanks said, “I’ve been collecting typewriters for no particular reason since 1978 - both manual and portable machines dating from the 30s to the 90s. The stories are not about the typewriters themselves, but rather, the stories are something that might have been written on one of them.” The book will also have photographs, so you don’t just have to dream about the typewriter that inspired a particular story: You can see it in all its glory. (It is not yet known if there will be 3-D or scratch-and-sniff options as well.)

So there you have it: Hanks is writing a book of stories inspired by the existence and origins of his beloved typewriter collection. If this takes off, he could follow it up with books of haikus based on his Tupperware collection, the horoscopes of his children, or a collection of discarded iPhones, each of which brings to mind a different rich and varied anecdote. (Why stop there? Did someone say “Hanks-hosted television anthology series”?)

And we’re guessing he’ll be able to pull it off. Hanks previously wrote and directed the well-liked That Thing You Do!, as well as Larry Crowne (which he wrote with Nia Vardalos), which was despised by all of humanity with the heat and ferocity of a million suns. Hanks recently published his first work of fiction in The New Yorker, a piece called “Alan Bean Plus Four,” reportedly in a bid to make unpublished fiction writers’ brains explode with jealousy and rage.

Hanks’ book of typewriter tales does not have a name or a release date, but I’d like to imagine that, just to be perverse, it will be written on a really primitive word processor.