The Dissolve On... our favorite Matt Singer writing 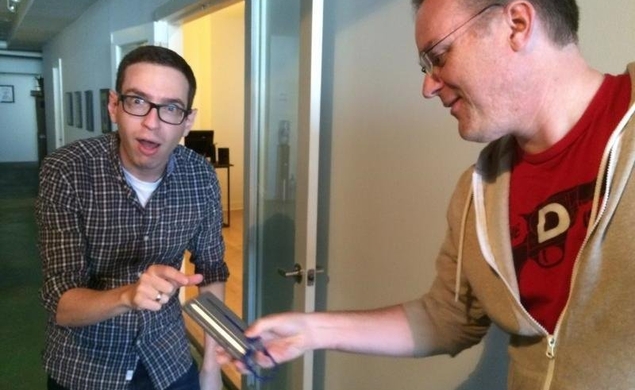 Today The Dissolve bids farewell to outgoing News Editor Matt Singer, who has accepted a new position with ScreenCrush. We’re going to miss Matt and his invaluable contributions to the site terribly, and recognize that The Dissolve’s first year and a half of existence wouldn’t have been possible without him. We wish him the best in all his new ventures, while also shaking our fists at him for taking his great writing and whip-smart sense of humor with him. We’ll always consider Matt an integral part of The Dissolve’s legacy, and a great co-worker and friend to boot. With that in mind, we each picked our favorite contribution he’s made to the site since we launched, to celebrate—and embarrass—him as he rides off into the sunset. (We encourage you to do the same in the comments.) Our favorite Matt Singer moments, in no particular order...

Nathan Rabin: I will always be grateful to Matt for playing a huge role in establishing the tone of The Dissolve (for writers and commenters alike) through his masterful Newsreel leadership: smart, funny, engaged, passionate yet irreverent. He’s a wiz at knocking out small pieces in a short time, but my favorite Matt piece is about as big and ambitious as articles get: his brilliant CareerView on Sylvester Stallone. Matt didn’t just rank Stallone’s films in chronological order, he told the riveting story of the man’s career, how he began as the most lovable of underdogs and morphed into a power-mad ubermensch (albeit of the diminutive, sideways-mumbling variety), and how Stallone’s films began to echo his own attempts to reinvent himself and stay relevant in a film culture than be cruel to aging action stars. Matt got me interested in Stallone again, and I don’t think I would have revisited Cobra or Tango & Cash for Forgotbusters (and had a ball in the process) if Matt hadn’t done the big work of documenting Stallone’s entire fascinating, maddening career in a single article that actually deserves to be called epic.

Tasha Robinson: Matt has a talent for turning out fast yet thoughtful opinion pieces that acknowledge the big film news of the day while taking a firm and nuanced stand on them—his take on a “rating the film critics” infographic that made the rounds in May stood out for me, for instance, and so did his takedown of the Canadian theater chain introducing upcharges for desirable seats. I use pieces like that as pass-arounds, to easily sum up not just the issues, but my own opinions, to other people online: “Here, Matt already said it all for me.” But my favorite Matt op-ed for The Dissolve went further in not just summarizing an opinion for me, but forming one. Writing about “teaser culture,” and how it’s ruining actual movie experiences by making anticipation more important than payoff, he put his finger firmly on something that had only inchoately bugged me, and laid out the problems and their cultural impact so thoroughly and clearly that I was on his side before I’d even registered that there were sides. I’ve referred back to that piece frequently, not just personally, but in my own writing, because it says so much about where the cinematic culture is right now, and why that’s cause for concern.

Noel Murray: As partners in Newsreel, Matt and I tried our best to come up with ways to turn the latest pieces of casting news or corporate synergy into amusing little lists. Matt always had the best ideas. He was the one who suggested our fantasy-casting game, wherein, for example, we tried to imagine what an Indiana Jones movie would be like in the 1930s, 1940s, 1950s, 1960s, and 1970s. And Matt (correctly) thought it would be fun to think up movies based on candy, imagining the horrors of the Chocodile, a creature that “roams the swamps of Louisiana preying on unsuspecting victims, particularly those who dare to claim he’s just a chocolate-covered Twinkee.” I always liked doing this more left-filed kinds of listicles, because while they didn’t take the big press-releases of the day too seriously, they did try to express some genuine affection for the history of cinema, and to honor the eternal hope of film buffs that some goofy-sounding motion picture could turn out amazing.

Scott Tobias: When we hired Matt for the News Editor position, he was the only staffer who hadn’t worked with us at The A.V. Club, and the only person we considered for the job. His voice—smart, accessible, infectiously enthusiastic—was the voice we wanted to set the tone for the site, but even then, we underestimated his capabilities and the range of his contributions. As Editor of The Dissolve, my domain is primarily reviews, but we were initially reluctant to bring Matt into the section, mostly because his Newsreel obligations had to take precedent. But when we needed someone New York-based to cover The Canyons, the instantly notorious Paul Schrader/Bret Easton Ellis flop starring Lindsay Lohan, Matt picked up his first review assignment and delivered a piece that staked out a middle ground between those eager to dismiss it as the next so-bad-it’s-good debacle and those who rushed to declare it a masterpiece of “post-theatrical cinema.” Matt wrote, “Prosumer cameras, Kickstarter, video on demand: All made The Canyons possible. But the result of those exciting tools is a cold, sad story that depicts the next generation of moviemakers as spoiled, vapid narcissists. The movie seems to despise itself.” Dead on, my friend.

Genevieve Koski: Look, no one wants to go to a late screening of the fourth Transformers movie after a long day of work and then turn around a review of it by the next morning—and that’s exactly why Matt ended up doing just that, because none of us wanted to do it. It was a short-straw assignment, no doubt, but Matt not only rose to the occasion, he proved he was the only man for the job with what is, in my estimation, the flat-out funniest review we’ve ever published. You could argue it was an easy target, but Matt’s takedown of Age Of Extinction and the juvenile hyperbole of its director, Michael Bay, is both richly observed and richly warranted. It’s also the rare hilarious review of a bad movie that doesn’t make me kind of want to see the movie; you can hear the suffering in every line of Matt’s writing, and it’s glorious.

Keith Phipps: Like all right-thinking people, I am a fan of wordplay. As such, I knew I always had something to look forward to each Monday in the form of Matt’s weekly Box Office Space headlines, which boiled down the story of the weekend’s winners and losers into a compact bit of cleverness. For an example, look no further than his final entry: “Did Ouija win the weekend? Y… E… S.” Some greatest hits:

...and so on. Matt will be missed. And so will his awful/wonderful sense of humor.