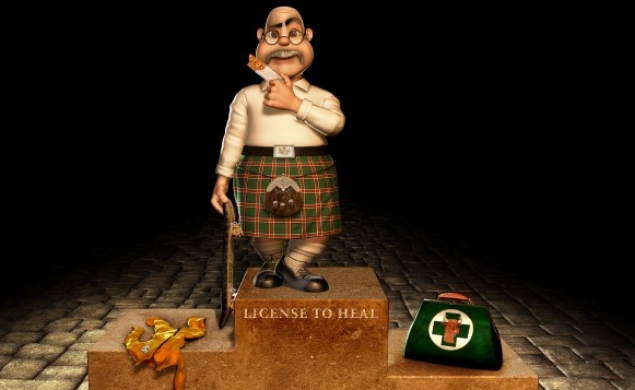 In 2004, Sascha and Tessa Hartmann began pursuing their dream of making the first Scottish CGI feature: Sir Billi, the story of a skateboarding veterinarian’s quest to find Bessie Boo, the last beaver in Scotland. Nine years later, the fruits of their labor will finally make it to the big screen, albeit briefly: Sir Billi will play in a total of three movie theaters before going to home video. “I’m just glad we have the release, to be honest,” Tessa said. How they got to this point is a saga worth recapping.

Tessa Hartmann’s day job is in publicity, but she and her husband became interested in making a film after noticing their young daughters’ interest in Thomas The Tank Engine and Bob The Builder. Wanting to make something along the same lines, Tessa realized her father looked like Sir Sean Connery. That was enough to come up with a story, which Sascha—a clinical neuropsychologist, but also an illustrator—then hand-drew for a three-minute demo. Through a business acquaintance, the short eventually made its way to Sir Sean, who agreed to participate. That led to a 20-minute version completed in 2006, which the actor liked so much that he encouraged its expansion into a feature.

Pulling together the £15 million necessary to fund this endeavor was hard, but Tessa got help from her aptly named entrepreneur father John Fortune Fraser, and from Connery, who agreed to take a percentage of Hartmann Media (Tessa’s PR firm) in lieu of a salary the filmmakers couldn’t afford. “We will be eternally grateful to them, the two most important octogenarians in our life,” Tessa said last year. After one Scottish screening, the film made its international premiere at the Sonoma International Film Festival last year, where “Goldfinger” singer Shirley Bassey—who also sang the Sir Billi theme—said it gave her “a tear in my eye.” Sascha Hartmann also reported that Christopher Lloyd was in attendance and “had only nice things to say about Sir Billi, from our creativity to the engaging plot.”

Still, reviews were dreadful: “woefully anemic” was the typical verdict of Variety’s Peter Debruge, who observed that it looked like “not only the animation but also the plot and characters were spat out by off-the-shelf software.” “There are haters in any society, and anyone who has seen my film has loved it,” Tessa said in response. “We are the David in a major Goliath industry.”