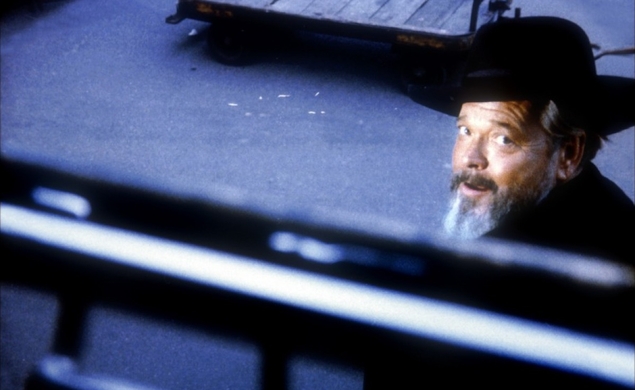 What a great time to be Orson Welles (besides the fact that, y’know, he’s been dead for 30 years). Last spring, Welles’ earliest film project, Too Much Johnson, was discovered in Italy, and back in August it was restored and made available online. Today, The New York Times reports that Welles’ last film project—a never-completed showbiz satire called The Other Side Of The Wind—will get similar treatment in 2015. After decades of legal battles over the surviving footage from the film, the production company Royal Road Entertainment has brought all sides together to work on a new cut of the movie, which it hopes will première on or around May 6, 2015, which would have been Welles’ 100th birthday.

The Times article lays out a fascinating story that involves multiple heirs and rights-holders. Welles worked on the film, off and on, for the final 15 years of his life, financing it through movie, TV, and commercial roles, and also through investors. The Times picks up the tale there:

“One of them was Mehdi Bushehri, brother-in-law of the shah of Iran and an investor in Astrophore. He later clashed with Welles over spending and took control of the negative reels in France, which is why they remained in the suburban Paris warehouse. Welles left behind a roughly 45-minute edited work print. Mysteriously, he managed to smuggle it out of Paris in 1975 in a van and he shipped it to California. Ms. Kodar said she has it now in Primosten, on the Adriatic coast in Croatia, where she lives.”

The film, which focuses on “the comeback attempt of an aging, maverick director played by John Huston” also starred Susan Strasberg, Dennis Hopper, and Peter Bogdanovich, who now faces the task of trying to assemble an edit of The Other Side Of The Wind that hews as closely as possible to Welles’ intentions, based on his rough cut, scripts, and notes. (Bogdanovich told the Times he’d promised Welles he would finish the movie if it was left incomplete at the time of his death.) He’ll be working with The Other Side line producer (and frequent Steven Spielberg collaborator) Frank Marshall to polish the raw materials and add music. Now all we need is for someone to find the fabled original Welles cut of Magnificent Ambersons before it was butchered by RKO. That would really make for a happy 100th birthday for Mr. Welles (besides, again, the whole already being dead part).