If it bleeds, it leads the Nightcrawler red-band trailer 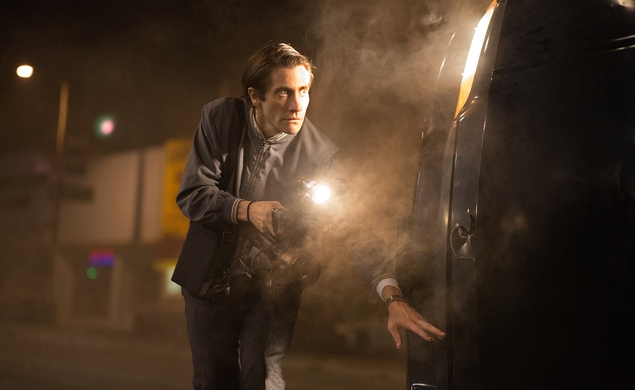 Nightcrawler is not a horror film, but it is opening on Halloween, and boy oh boy does it look creepy. The thriller features Jake Gyllenhaal as a ghoulish human parasite with no moral compass and a vocabulary rich in self-improvement terminology who trawls the night, looking for violent crimes to document and exploit. Just looking at the gaunt, strangely praying mantis-like physique and giant bug eyes of Gyllenhaal (is it just us or does he suspiciously resemble Zorak from Space Ghost: Coast To Coast in this trailer?) is viscerally disturbing.

The buzz for writer-director Dan Gilroy’s lurid psychodrama has been building over the past few weeks, and continues with the release of a red-band trailer hailing the film not just as a gripping piece of cinema but also as “Fucking amazeballs” and “Fucking bonkers.” Yes, Nightcrawler is apparently so intense and so awesome that its awesomeness cannot adequately be conveyed without using profanity and silly slang terms—though the commercials for Planes: Fire And Rescue similarly hailed it as “fucking amazeballs” and ended up turning some parents off in the process.

The trailer makes Nightcrawler look darkly funny, wildly propulsive, and winningly uncompromising, as well as the best role for Gyllenhaal since Prince Of Persia. I’m excited. Or rather, I’m fucking excited. This better be both amazeballs and bonkers or I will terribly disappointed. So yeah, this is definitely NSFW, or should we say, fucking NSFW? (Boy, this swearing thing is fun! Thanks for introducing me to the concept, red-band trailer for Nightcrawler!)