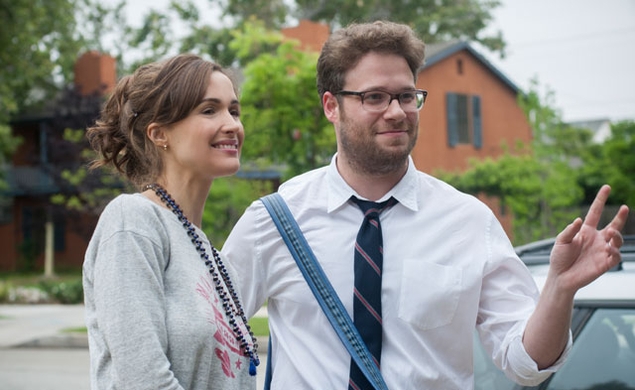 Seven years. That’s how long it took for Seth Rogen to evolve from the pot-smoking dude who’s too immature to have a kid in Knocked Up to the sensible, responsible family man outraged at the immature, pot-smoking dudes from the frat next door in Neighbors. In this upcoming comedy, Rogen stars opposite Zac Efron, who needed just one year to evolve from getting peed on by Nicole Kidman to crazy party animal (Kidman urine is a known gateway drug), as a guy whose happy home life with his wife (Rose Byrne) and newborn baby is thrown into chaos by the arrival of a fraternity on their bucolic suburban block.

Here’s the film’s first trailer. As you’ll see, it’s a red-band preview, and a wee bit NSFW. If your place of business might frown on, say, the sight of McLovin getting some (Mc)loving, you may want to watch this one after you get home from work:

Neighbors marks the first film collaboration between Rogen and Nicholas Stoller, another alumnus of the Judd Apatow School of Sensitive Bro-Dude Comedy; the pair both worked on Apatow’s college TV series Undeclared, where Rogen was a star and writer and Stoller was a writer and story editor. From there, Stoller directed Forgetting Sarah Marshall, Get Him To The Greek, and The Five-Year Engagement. Coming after the pointedly titled This Is The End, which felt like a something of a capper on Rogen’s hanging-with-the-buds-(while-smoking-the-bud) period, Neighbors looks like a change of direction for the actor into (slightly) more mature roles.